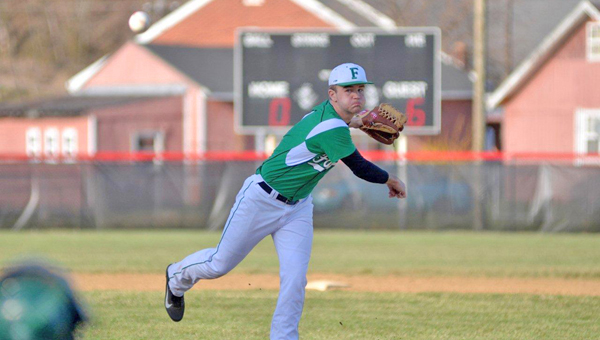 PROCTORVILLE — This was more than just a win for the Fairland Dragons.

In a game that featured the Dragons turning a triple play, Fairland limited Vinton County to just two hits and blanked the Vikings 4-0 on Monday in the Division II sectional tournament.

With the win Fairland (12-9) will play at Jackson on Thursday at 5 p.m. The winner advances to the district tournament May 21 at Chillicothe’s Veterans’ Stadium.

“Aliff and Raines did what they were supposed to do. Their pitcher did a nice job getting his breaking ball over for strikes. Right now, you just want to win and advance.”

Matt Aliff went five innings for the win, striking out five, walked two and allowed the two hits. Kyle Raines struck out two and did not walk a batter as he worked two innings for the save.

The game was scoreless until the third inning when the Dragons scored twice.

Luke Phillips walked, stole second base, went to third on a throwing error and scored on a sacrifice fly by Kyle Sowards.

Aliff and Josh Ross then singled, moved up on a passed ball and scored when Raines grounded out to first base.

Phillips walked, stole second and scored on a hit by Sowards. Aliff singled to put runners on the corners and Raines grounded out for a second time as a run scored.

Fairland plays at South Point on Wednesday in an Ohio Valley Conference game.

CINCINNATI (AP) — The Bengals signed two more of their draft choices on Monday, leaving five of their 10 picks... read more