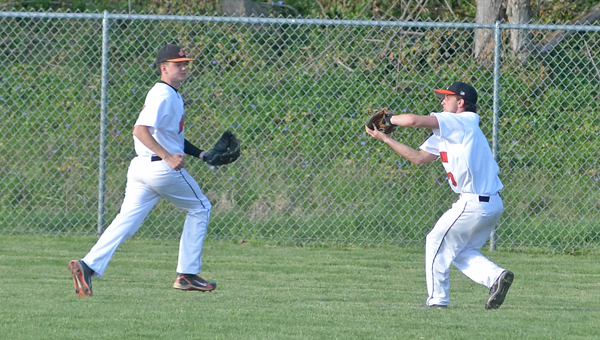 Ironton outfielder Korey Kellogg (right) chases down a fly ball for an out. The Fighting Tigers beat the Coal Grove Hornets 9-4 on Wednesday in the Division III sectional tournament. (Kent Sanborn of Southern Ohio Sports Photos)

The heart of the Ironton order was really pumping some fresh blood into the offense.

Stephens was 3-4 with three RBIs, Easterling also went 3-4 with two RBIs and Battise 3-3 with an RBI as Ironton collected 12 hits.

“Offensively, we hit the ball well and got some timely hits to drive in the runs. Our 2-3-4 hitters — Easterling, Stephens, Battise — came through for us tonight. Overall, it was a good win,” said Ironton coach Larry Goodwin.

Derek Battise got the win as he allowed just three hits.

“Derek did a good job despite not having his best fastball,” said Goodwin. “After the first time through their order, we realized Derek needed to rely on his secondary pitches to get outs.”

Ironton (10-8) jumped in front with a pair of runs in the first inning.

Luke Diamond walked, Easterling singled and Stephens and Battise each singled in a run.

The lead went to 5-0 in the second inning.

Coal Grove (7-12) crept back into the game with three runs in the top of the third.

Mason Nance reached on an error and scored on a hit by Jesse Rigsby.

But Ironton answered with four more runs in the bottom of the inning.

The Hornets final run scored in the fourth when Travis Carey doubled and scored on a ground out.

Ironton plays at Oak Hill on Saturday starting at 11 a.m. in the sectional finals.

Jim Walker jim.walker@irontontribune.com   AID — The score suggests it was all about the offense. Not so, says Symmes Valley... read more