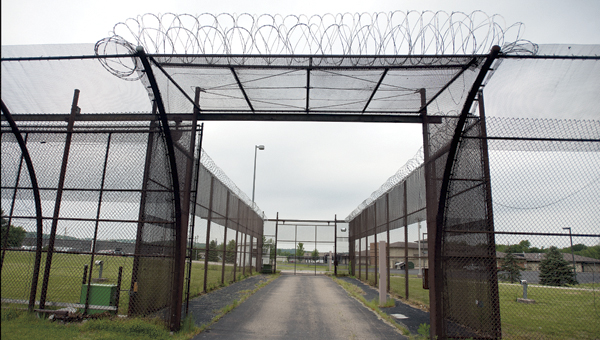 FRANKLIN FURNACE — A dozen yellow irises bloom alongside the brick and stone building set on the freshly mowed acreage along Gallia Pike, a sign that once this and the other nine buildings were not the silent tombs of empty classrooms, sleeping rooms and offices that that they are today.

The only giveaway that this complex was once a correctional facility is the border of stainless steel barbed wire that surrounds the roofline of each of the buildings.

Whether this campus for the one-time Ohio River Valley Juvenile Correctional Facility in Franklin Furnace can be resurrected into another kind of correctional facility brought about 25 officeholders and interested citizens from Lawrence, Scioto and Jackson counties to take a special tour on Thursday.

Last month the state corrections department invited officials from those three counties, plus Pike and Adams, to look at the facility it wants to sell to see if collectively those officials could come up with a new use.

“This has been lying fallow,” State Rep. Terry Johnson, told the audience before the morning tour began. “It is a wonderful facility. It is in shape. Let’s see what this place has to offer and sit down and brainstorm.”

In Sept. 10, 2011, the state shut down the correctional facility as part of budget cuts, a facility that at its height housed 340 youthful offenders who were getting one more chance before the steel bars of an adult prison controlled their days.

Right now it’s empty, all 199,591 square feet of it. And for 90 minutes those public servants and private citizens walked almost every inch of it coming up with their own ideas of how it should be used in the future.

Uppermost in the minds of the Lawrence County Commissioners, sheriff and members of the county’s jail resolution committee is whether the facility, or any part of it, can become the answer to end the overcrowding at the Lawrence County Jail that has put that facility on the state’s radar. Earlier this year the state sent county officials a laundry list of deficiencies it wants corrected. If all are enacted they add up to a hefty pricetag.

Now those officials have to decide if the aging jail is worth investing in or look elsewhere for a place to house criminals.

Tour guide for morning was David Blackburn, project manager for the Ohio Department of Youth Services.

“There are 30 plus acres here, 244 rooms, a school, cafeteria, warehouse and maintenance department,” Blackburn told the group.

As far as housing there are six “dry” units with 24 beds each with each unit offering communal bathrooms and four “wet” units of 25 beds each with a sink and toilet in each unit.

In each of the dry units is a flat blue-gray metal bed bolted to the wall with a window slit the width of a hand and the length of an arm bringing in light.

The wet units are all maximum security with a cuff port in each door to allow food trays to be passed through. There are no windows in those units.

“It is a fantastic facility,” Lawrence County Commissioner Bill Pratt said. “It is a shame it is not being utilized. To think of all the problems we have in Lawrence County, to know this is 12 miles away. … It is disappointing we don’t have commissioners from Pike and Adams to tour the facility. Pike County doesn’t even have a jail.”

Pratt said using one of the 24-bed units for female prisoners could alleviate some of the overcrowding at the county jail, if the state operated the facility.

“(If) they would lease a number of beds, we could guarantee one of their pods,” he said.

Right now it costs the county $38 a day to house a prisoner locally. Pratt said the county could afford between $45 and $50 a day at the Franklin Furnace complex.

“With them providing the personnel,” he said. “If we did, it would have to be for less.”

When the state shut the doors of the juvenile jail, it left much of the furniture and equipment behind, including a dental exam room and a fully equipped kitchen. The state has also kept the utilities on.

“The facility is awesome,” Lawrence County Sheriff Jeff Lawless said. “It certainly meets well beyond our needs and would be great to have where many counties could benefit with the crowding problems. We hope the state sees our need and helps us open that facility to alleviate our problems.”

However, Commissioner Les Boggs says the financial bottom line would be the determining factor if Lawrence County can find a use for the juvenile facility.

“You have to consider the cost,” he said. “Until we hear all the proposals, we won’t be able to make a decision.”