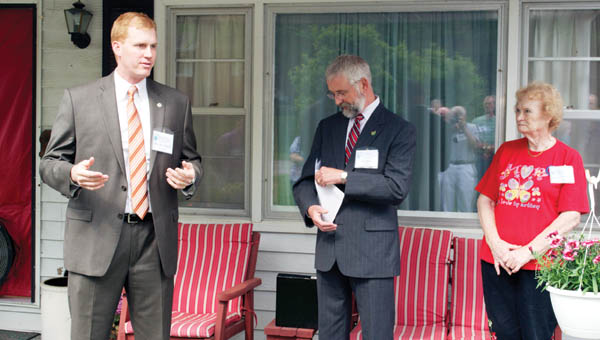 CHESAPEAKE — It was not too long ago that septuagenarian Lorene Plybon could be found crawling in her attic installing her own insulation or emptying the bucket collecting water from a leaking roof, but now she can keep her feet on the ground and find other ways to save money and be more energy efficient.

At 78, Plybon is still an active member of her community but can no longer be as active within her home as she used to be. The Ironton-Lawrence Community Action Organization, Ohio Home Weatherization Assistance Program and Columbia Gas Warm Choice combined forces Monday to help Plybon make needed improvements to her home to help her save money on energy costs.

“I’m looking forward to this helping me with my air conditioner this summer,” Plybon said. “I really appreciate all they’ve done for me. I appreciate it bushels and bushels.”

It took years of applying for weatherization assistance to come her way, Plybon said. She said there are many people throughout the county applying and she understands the agencies get to people as soon as they can. To show her appreciation for the service being provided, Plybon agreed to have her home serve as a public demonstration for community and state leaders to see the process of weatherizing a home.

“I’d been working with Lorene for awhile when my boss told me he needed a house in Lawrence County to invite Representative (Ryan) Smith to to show him what our weatherization program does,” Tom Calhoun, home tour director with Corporation for Ohio Appalachian Development, said. “I immediately said I already knew just the person, Lorene Plybon in beautiful Chesapeake.”

Having Smith and other decision makers take the tour of Plybon’s home as it undergoes weatherization is important because it highlights a relatively small part everyone can play in helping reduce the world’s environmental problems, Calhoun said.

Smith agreed with Calhoun, saying he was impressed with what he saw during the tour.

“This is great,” Smith said. “We need to make sure we have a lot of participation in this program because it not only helps people save money, but helps reduce our energy consumption.”

And reducing its energy consumption will help the U.S. better the environment and reduce dependence on foreign oil, Smith said.

While the big picture is important, each weatherization project is focused on the customer, John Easterling, CAO weatherization director, said. He said the project, which will take two to three days for Plybon’s house, has a simple goal — to make her home safer and more energy efficient. He said everything from her furnace to insulation will be inspected and the proper upgrades and fixes made.

D.R. Gossett, CAO executive director, said it is important for the community and the CAO’s partners to have the opportunity to come out and see the weatherization process. He thanked everyone for attending and Plybon for opening her home for the demonstration.

As has been the tradition for years, the somber Navy Night ceremony will kick off events Thursday for Lawrence County’s... read more