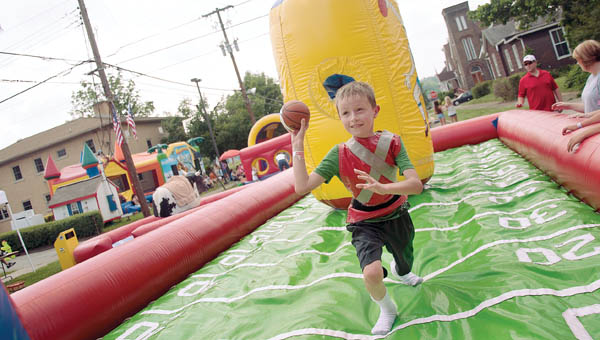 Dylan Bok, of Billard, takes part in the bungee run while at the 2012 Catholic Schools’ Charity Fair in Ironton.

There will be no shortage of things to do in Ironton this Memorial Day weekend, with many events being long-time traditions that have entertained those who attend for decades.

The Ironton Catholic Schools’ Charity Fair has been one such event for almost three of those decades. The event, the largest fundraiser for the district, celebrates its 27th year with food, fun and games.

Chris Monte, co-chair of the event, said it is difficult to estimate the number of people who will attend, but if the past is any indicator, the number will easily be in the hundreds.

“This is a big event and it’s a year-round process to prepare for each fair,” Monte said. “A lot of things start in the fall, but the last three or four months it gets really busy.”

While it is a lot of work to pull off, Monte said the fair has been going on for so long that people know what to do. He said there are small things that come up each year, but generally things run smoothly.

“We have a very dedicated group of people who are always there to help us get things rolling and make sure everything is set up,” Monte said. “We are very fortunate to have so many dedicated helpers.”

The event takes over the St. Joseph Catholic High School parking lot and the street along side it. Monte said they block the street to accommodate the size of the fair. He said people look forward to the event every year because it is a good place for community members and school alumni to get together, get something to eat and talk.

The following are the times for the Charity Fair: