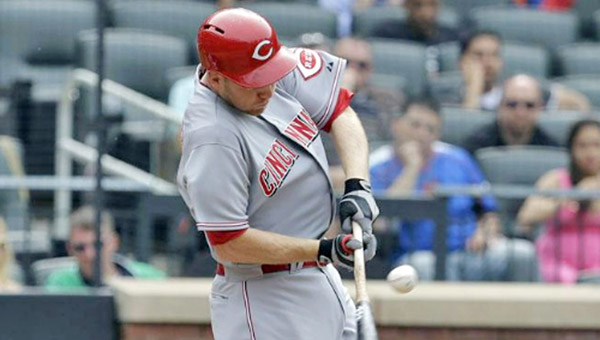 Cincinnati third baseman Todd Frazier connects for a two-run single during the ninth inning as the Reds scored three times and beat the New York Mets 7-4 on Wednesday. (Photo Courtesy of The Cincinnati Reds)

NEW YORK (AP) — Brandon Phillips and the Cincinnati Reds are getting the good bounces right now. Ike Davis and the New York Mets certainly are not.

Phillips sent a strange double spinning over first base to break a ninth-inning tie and the Reds completed a three-game sweep of the struggling Mets with a 7-4 victory Wednesday.

Joey Votto homered and Zack Cozart had a career-high four hits, all off Matt Harvey, in a game that featured a little bit of everything — including a testy exchange in the dugout between Cincinnati starter Mat Latos and teammate Jay Bruce.

“It was just an issue between the team and it’s going to stay that way,” Bruce said. “The only reason anyone knows about it is because the TVs caught it, but stuff happens all the time. It’s over. We’re a team, we’re a family. Things like that happen, so everything’s good and it’s a non-issue.”

“We closed it out strong. We won the last three innings even though they made it tough and they had the winning run on second a couple times,” manager Dusty Baker said. “We were kind of flirting with danger quite a few times, but our defense saved us.”

Harvey appeared headed for his first loss of the season before the Mets rallied.

Rick Ankiel had three extra-base hits and two RBIs for New York, including a tying triple with two outs in the seventh. Daniel Murphy added three hits and drove in two runs from the leadoff spot.

With the score tied at 4 in the ninth, Shin-Soo Choo legged out a leadoff double against Bobby Parnell (4-1) and reached third on a groundout. Votto was intentionally walked before Phillips hit a cue shot toward first base.

The ball hit the baseline and bounced over Davis’ glove in front of the bag. Determining he had no chance to throw out Choo at the plate or start an inning-ending double play, Davis shied away from touching the ball — thinking it would go foul. But it bounded over the bag and was called fair by umpire Phil Cuzzi.

“Instinct told me not to catch the ball,” Davis said, adding he still wasn’t sure if it was fair or foul even after watching replays. “It just wasn’t the right play, I guess.”

Choo scored the tiebreaking run and Davis was left shaking his head as Mets manager Terry Collins came out to argue.

“Anytime you lose a game it’s not fun — especially on a play like that,” Davis said. “Everything that can go wrong right now for me is going wrong.”

Pinch-hitter Todd Frazier fisted a two-run single into center to make it 7-4.

Alfredo Simon (4-1) worked around Cozart’s throwing error in the eighth, and Aroldis Chapman got his 10th save in 12 tries.

“I made all my pitches, hit all my spots,” Parnell said. “Broken bats and little flairs. What can you do?”

In a matchup of unbeaten young right-handers, Harvey and Latos took a 2-all duel into the seventh, when Cozart sparked a Reds rally with his fourth hit. Votto also singled and Phillips grounded an RBI single just inside third base.

That was it for Harvey, who walked off to a warm ovation from a crowd of 30,415 that included more than 8,000 area students on Weather Education Day at Citi Field.

Bruce’s run-scoring groundout gave Latos a two-run lead, but he couldn’t hold it. Murphy hit an RBI single with two outs in the seventh and Ankiel tripled high off the left-field wall to tie it.

J.J. Hoover retired David Wright on a popup to keep the score tied.

Harvey was charged with four runs and a season-high nine hits in 6 1-3 innings. He had allowed three runs or fewer in 16 straight starts dating to last season.

“It’s not like they crushed him,” Mets catcher John Buck said. “They did do a good job of making him throw a little bit more, working counts, making him pitch to get them out.”

Murphy and Ankiel gave the Mets a quick lead with consecutive doubles to start the first inning.

Cozart doubled in the third and Votto went the other way with a 3-0 pitch for his seventh home run, extending his hitting streak to 11 games.

In the bottom half, Cozart robbed Wright of a run-scoring hit with a diving grab at shortstop. Lucas Duda also lined out to end the inning and Latos took that 2-1 lead into the fifth, when Ruben Tejada hit a leadoff double and advanced on Harvey’s sacrifice bunt. Murphy hit a sacrifice fly to shallow right, and Tejada scored with surprising ease when Bruce’s weak throw was off target.

After the inning, cameras caught Latos and Bruce having an animated argument in the dugout.

Latos wouldn’t comment, and Bruce said “there’s really nothing to talk about.”

“It happens all the time. It’s really nobody’s business but ours,” Baker said.

NOTES: Jack Hannahan started at 3B in place of Frazier because Baker wanted to get another left-handed bat in the lineup against Harvey. Baker said he’d been thinking about giving Hannahan a start at 1B soon, but Votto has been too hot to sit. … Davis has one hit in his last 38 at-bats after going 0 for 2 with two walks. He flied out to the center-field warning track to end the sixth, leaving him hitless in his last 25 at-bats with runners in scoring position.

Jim Walker jim.walker@irontontribune.com   OAK HILL — There were only a handful of finals in the Division III district track... read more