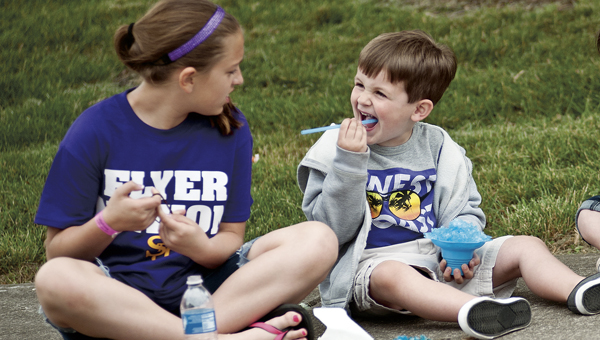 Brea Eastham claimed her 19 seconds of fame easily as she rode the mechanical bull with enthusiasm, style and panache at Saturday’s Charity Fair.

“I saw the little kids doing it and I wanted to do it too,” Eastham said as she watched a replay of her equestrienne prowess on a friend’s cell phone.

For all of Saturday and Sunday Quincy Street between Sixth and Fifth streets was blocked off as the Ironton Catholic Community hosted the 27th annual Charity Fair. The street was filled with inflatables, games, book and collectible sales as well as food vendors offering corn dogs, pizza, snow cones and lemonade.

His father, Louie Sheridan, was president of the freshman class at St. Joseph High School 27 years ago when the idea of starting the Charity Fair was first discussed. The motivation behind it was practical. Holy Family Church in Ashland, Ky., had just shut down its high school because of finances.

“We didn’t want to see what happened to Holy Family happen to St. Joe,” Sheridan said. “We wanted to provide a Catholic school-environment education from first grade through high school.”

Sheridan recalls that the first fair brought out only a couple of food vendors. Today the Charity Fair is the biggest fundraiser for Ironton’s Catholic schools.

“The volume has grown,” he said. “It has been a gathering event ever since.”

This was the seventh year for Liz Alexander of Ashland, Ky., to volunteer at the fair. She and her daughter, Meg, a junior at St. Joseph, were in charge of one of the game booths that brought out hopeful youngsters aiming for an inflatable prize.

“This is fun for all the kids,” Meg said. “They want to be with their friends and play all the different games.”

One of the traditions of the fair is the raffle for the 23 gift baskets that ranged from one for cooks including a crockpot to a flat screen TV to a Cincinnati Reds basket complete with game tickets.

Sarah Walker, manning one of the candy booths with her mother Karen Albers, said the fair coinciding with Ironton’s long-running Memorial Day Parade brings out a good crowd.

“It’s like a reunion for this weekend,” Walker said. “It is such a major tradition. You see everybody.”

Safety must always be top priority

Public safety must always trump convenience — regardless of what time of year it is. The Kentucky Department of Highways... read more