IHS grads ready to start next step in their lives 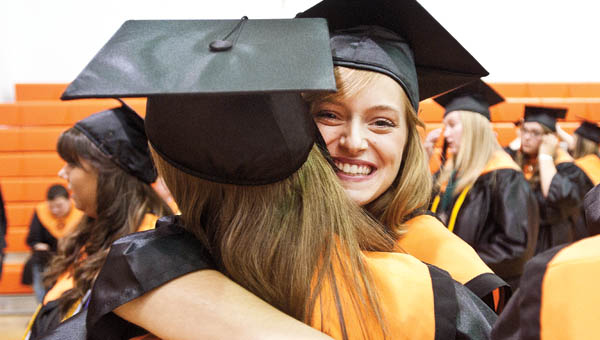 The first graduate on the scene was Steven Easterling, who had a special duty to perform at the ceremony. In his role of class president, Easterling gave the opening prayer, which he composed.

Easterling, who wants to play baseball at Morehead State University, described himself as excited but not nervous. His mother, Pamela Stacy, was equally excited for her son.

“He will look back and cherish this a little more when he gets older,” Stacy said.

This graduation was the second time Jessica Fitzpatrick watched one of her children walk across the field to get a diploma.

This time it was her youngest, Trevor White, who plans to attend Ohio University at Chillicothe to become a teacher.

“This is my baby,” Fitzpatrick said. “That’s why I’m a little more emotional than before. I bawled at baccalaureate.”

Indiasia Murphy wants to take her love of children and channel it toward a career in nursing.

Giving her a little help with her cap and tassel was her mother Roxanne Sudderth, who was watching her first child graduate from Ironton High School.

“I am very proud of her,” Sudderth said. “She is doing something I didn’t get to succeed at.”