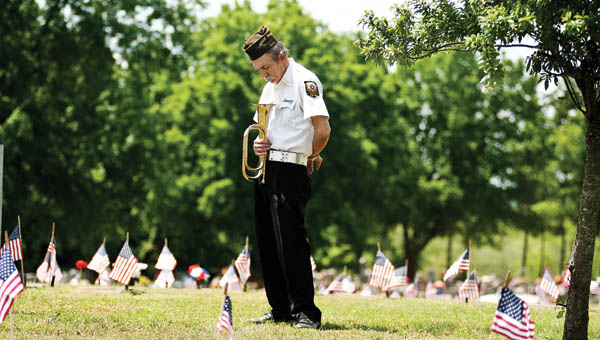 Bob Sloan stands with his head bowed during the invocation

Nine hundred American flags ruffled in a light breeze Sunday afternoon across the Soldiers Plot at Woodland Cemetery as veterans and civilians joined to honor those who fought for this country’s freedom.

About a hundred came to the Veterans Memorial Service, as much of a tradition of the Memorial Day weekend as the annual parade on Monday.

“We gather among these flags, a signal of freedom, to honor the memory of these warriors,” McCown said.

As of today 6,692 U.S. soldiers have died in the ongoing conflicts in Iraq and Afghanistan and 50,806 have been wounded there.

“We pay tribute to them,” he said.

Following the invocation by Brother Chad Pemberton, the National Anthem was sung by Herb Rose with the posting of the colors by Ironton VFW Post 8850.

Both Sheridan and Barker’s remarks focused on the sacrifice the American soldier has made for his country.

“They lost their lives in the pursuit of freedom,” said Sheridan, a Desert Storm veteran and past commander of VFW Post 8850. “This is the most important time of the Memorial Day weekend. We join some who paid that ultimate cost of freedom. Their names are all we know. All we can do is pay tribute.”

The soldier in battle isn’t there for political or economic reasons, Sheridan said.

“When it is all said and done, the cause is freedom so some kids can learn and do what they want to do,” he said.

“I am at the home of patriotism in America,” Barker said.

Barker also paid tribute to those who died in the conflict that inspired the first Memorial Day — the young men, some barely teenagers, who fought in the Civil War.

“More than a half million gave their lives to preserve the union to keep us one nation under God,” he said. “Memorial Day is so important. It is set aside for those who gave their life to defend this country.”

Vikings hammer out next chapter