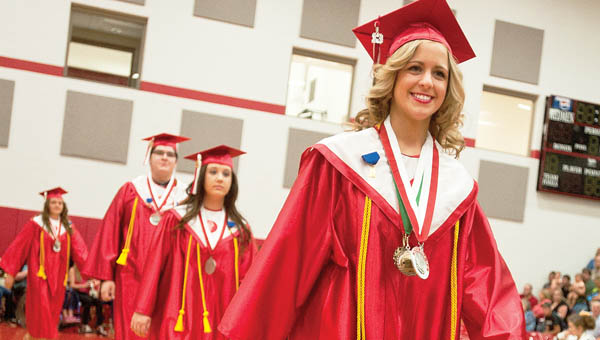 PEDRO — Danielle Kerns was posing prettily for her grandmother’s camera about an hour before she was to take that special walk across the stage at Rock Hill High School.

Kerns was the first grandchild of Karen Spillman to graduate high school.

“I am just bubbling over,” Spillman said. “She has accomplished a lot.”

The medals dangling from ribbons around her neck showed some of what Kerns accomplished in her high school days — honor graduate and post secondary education.

Her next steps will be directed toward Shawnee State University where she will study to be a mental health counselor. But Saturday night she still had the graduation ceremony to get through.

“I’m kind of nervous,” she said. “And I was nervous the first day of high school.”

Rex Lawless II was set to graduate with honors with distinction. He too is headed to Shawnee State where he will study pre-med.

He expects his future to be bright.

“I have a good drive for being successful,” Lawless said.

Kaylee McCormack has a different career path mapped out as she plans to enlist in the Air Force in the next few months.

“My family is in the military,” she said. “And I want to follow my family’s footsteps.”

The night meant double duty for Brook Knipp as she was set to give two speeches to the audience of family and friends gathered at the auditorium. The first one was as president of the senior class and the second as valedictorian.

Winning the Appalachian Scholarship that will give her full tuition to Ohio University in Athens, Knipp will study biochemistry with the goal of becoming a physician’s assistant.

“I’ve always been drawn to helping people,” she said.