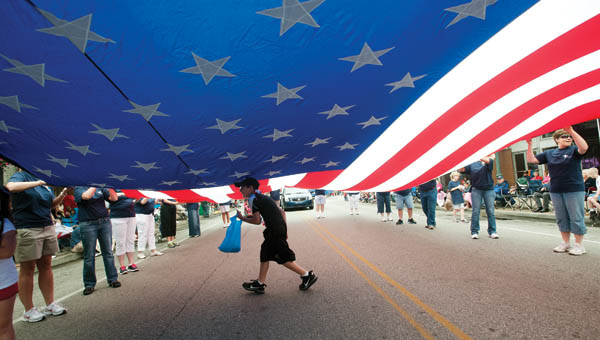 Employees with Our Lady of Bellefonte carry a huge American flag.

Historic parade brings out families for day of fun, remembrance

The rain clouds parted Monday morning as if they knew the city below had big plans for the day.

Big plans indeed. This year marked the 145th Ironton-Lawrence County Memorial Day, another milestone for the oldest continuously held procession in the nation to celebrate the holiday.

By 8:30 a.m., a cool breeze whipped around the busy people setting out their folding chairs and shade tents along South Third, Sixth, Quincy and Center streets.

Some even had their spots picked out the day before.

Adam Crown and his family parked in a small lot near the Rotary Fountain on Center Street on Sunday to ensure a prime viewing spot for the parade. Equipped with chairs, shade tents, food and cold drinks, the Crowns were in for a comfortable viewing experience.

Crown, an Ironton native, said he had been coming to the annual event since he was a child and wanted his children to experience it as well.

Marie and Bob Wiseman made the trek from Point Pleasant, W.Va., to take their two grandchildren, from Huntington, W.Va., to the big parade, and to see their other grandchild march with the Symmes Valley band.

Although the Wisemans have only attended the parade for three years in a row, they said the long-standing Ironton tradition was an important one.

“It’s a way to carry on a tradition in the community,” Bob Wiseman said. “If you don’t, it will die out. … We’re usually not parade people, but we enjoy this one.”

“And it honors our veterans,” Marie Wiseman said.

Allison and Connor Wiseman pondered their favorite aspects of the parade over Frosties from Wendy’s in Coal Grove.

“I liked the horses,” Allison said.

“I like the silly cars,” Connor said. “And the fancy old one, too.”

The silly cars Connor referred to were driven by the El Hasa Shriners, a crowd favorite at the parade with their hillbilly-esque and comically small jalopies spraying water into the crowds.

A first for this year’s parade was the Ironton Farmers Market represented with a float, which won the civic float award from the parade committee.

“It’s to honor the veterans for their support,” Hanshaw said.

Another interesting first for the parade — and one that would have been difficult to miss — was the bright yellow chicken waving from atop a giant KFC bucket.

“We want to be a part of the community,” said Doug Knipp, owner of the 17 Tri-State restaurants.

“This is the largest parade in the area,” said Kelly Wechsler. “It’s a big deal. These are our customers.”

As always, the parade was filmed by the Ohio University Southern electronic media department with J.B. Miller and Terry Hapney co-commentating.

The parade will be broadcast beginning at 8 p.m. tonight on Time Warner Cable channel 25.

A variety of road construction and major maintenance projects may require lane restrictions and/or closures along the state and federal... read more