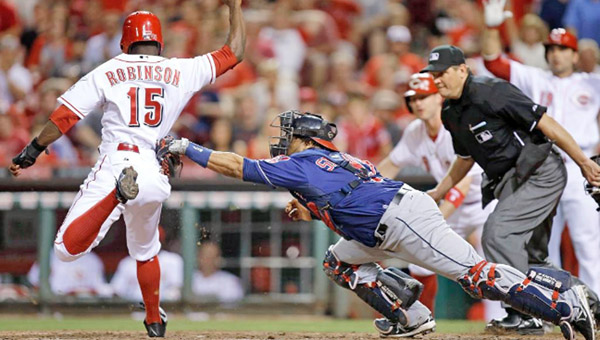 Cincinnati’s Derrick Robinson (15) is tagged out at home by Cleveland catcher Carlos Santana during the seventh inning of Tuesday’s game. The Reds won 8-2. (Photo Courtesy of The Cincinnati Reds)

CINCINNATI (AP) — Even on a night when the Reds stranded runners willy-nilly, they still came away with a lopsided win.

Says a lot about how they’re playing these days.

Xavier Paul singled home a pair of runs in the first inning, and Cincinnati completed a two-game home sweep of the Cleveland Indians with an 8-2 victory on Tuesday night that was free of any up-and-in acrimony.

The intrastate rivals headed to Cleveland for two more games. The Indians lead the all-time series 42-41.

The Reds have won 14 of their past 17 games overall, leaving them with the second-best record in the majors at 33-19. They trail NL Central-leading St. Louis.

“As a team, we’re feeling great,” Paul said. “We’re pitching real well and hitting real well, and we’ve finally started to win some games on the road, which is great.”

Cleveland has dropped five straight — matching its season high — and seven of eight.

Mat Latos (5-0) handled a slumping lineup, allowing one run in 6 1-3 innings. The Indians have been outscored 33-14 during their losing streak.

“The last two starts, everything has felt good,” Latos said. “My mechanics have been in sync with my arm feeling great. I had some good stuff against a good-hitting lineup.”

The Reds had 18 hits, one shy of their season high, but stranded 12 runners. Cincinnati repeatedly wasted chances before pulling away in the seventh.

“We had a lot of opportunities,” manager Dusty Baker said. “I didn’t like the way the game was going. We were leaving them out there.”

Paul’s two-run single put the Reds ahead 3-0 in the first against Zach McAllister (4-4). The Reds added four in the seventh against Cleveland’s struggling bullpen, with Derrick Robinson and Zack Cozart contributing RBI singles.

Cleveland’s slump is in some ways reminiscent of last season. The Indians were playing well at midseason then, but won only five games in August to fall flat.

Is this starting to feel familiar?

There was one lingering issue from Cincinnati’s 4-2 win in the series opener: Would the Indians retaliate for Aroldis Chapman’s inside pitches?

The Reds closer threw two of them up-and-in to Nick Swisher while closing out the game on Monday, resulting in stares.

Cincinnati’s Brandon Phillips and Shin-Soo Choo were hit on Tuesday, but went to first without complaint or warning from plate umpire Chad Fairchild.

The series matching teams from Ohio’s north and south has taken on an edge for the second straight year.

Last year, Indians starter Derek Lowe got hit by a Latos pitch and gestured toward Baker. Baker acknowledged that he had Latos pitch inside because Lowe had hit Joey Votto in a game three years earlier.

Choo, who came from Cleveland as part of the offseason trade for Drew Stubbs, homered in the series opener and had another solid all-around game on Tuesday. He ran down two fly balls on the warning track and opened the Reds’ first inning with a double.

Cozart followed Choo’s double with a bunt single, and Votto singled home a run. Paul’s single made it 3-0, matching the most earned runs that McAllister has allowed in a game this season.

Stubbs singled with one out in the fifth — only Cleveland’s second hit — and stole second. Michael Bourn singled off Votto’s glove at first base, cutting the lead to 3-1.

The Reds failed to score despite getting at least two runners aboard in the third, fourth, fifth and sixth innings before breaking it open by sending nine batters to the plate in the seventh.

NOTES: Indians closer Chris Perez, who went on the 15-day DL before the start of the series, had an MRI that found mild tendinitis. He won’t throw for at least five days. … SS Asdrubal Cabrera had his seven-game hitting streak snapped. … McAllister has gone at least five innings and given up no more than three earned runs in his past 12 starts. … Choo has been hit by a pitch 14 times this season, most in the majors. … RH Justin Masterson, who has won three of his past four starts, goes for Cleveland on Wednesday against RH Bronson Arroyo, who is 3-0 in his past three starts with a 1.33 ERA.