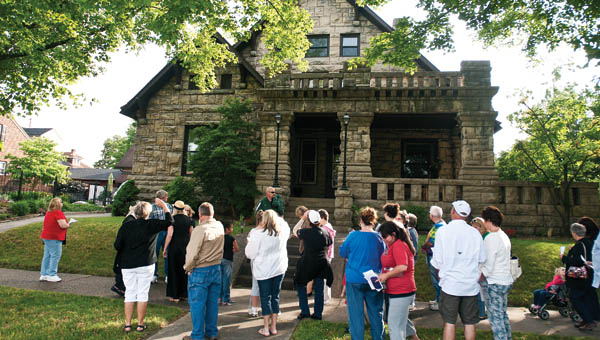 Just as she was last month at its spring tea, Kay Rader was dressed in costume to greet guests to the Lawrence County Museum. Only on Saturday Rader wasn’t recreating her well-known portrayal of ironmaster Nannie Kelley Wright.

This time Rader was Eliza Gray, a member of the family that built the house where the Lawrence County Historical Society has its headquarters. Her portrayal was the start of the evening’s Rankin Historical District Tour.

Gray, widow of George N. Gray, was one of Ironton’s leading citizens in the late 1880s and early 1900s until her death in 1924. She and her husband brought up three children at the Sixth Street mansion. She was also a direct descendant of John Rankin, a minister and abolitionist. The section of streets around the museum is named for Rankin.

“Ironton was a rip-roaring town in those days,” Rader, as Gray, told the crowd gathered in the museum’s front yard. “We had dances, parlor games and visited back and forth.”

The Grays turned a family tragedy into a benefit for the city after the death of their oldest son, Charles Sedgwick, who died in 1898 in the Spanish American War.

“Ironton needed a hospital,” Rader’s character said. “We decided to buy the (W.D.) Kelly house on Quincy Street between Fourth and Fifth streets. Sisters who had a hospital in Cincinnati came up here and founded a hospital.”

That became the Charles S. Gray Deaconess Hospital that opened in 1900.

After thanking the visitors for coming, Rader turned the tour over to Debbie Rogers, Carol Kitts and Elizabeth Melvin who were guides for the evening.

First of the 18 sites on the tour was the house at 422 S. Sixth St., built by DeWitt Clinton Wilson, a doctor who had also his office there. Later two other doctors called the structure home — Dr. Will Pricer and Dr. G. Newton Spears.

Next was the Roosevelt Hospital built in 1920s, now an apartment complex, at the corner of Fifth and Washington streets. The hospital was built by Dr. C.G. Gray, not a relation to Eliza Gray, who had started his practice at the Gray Gables Sanitarium he built in Hanging Rock.

Following that was the house at 404 S. Fifth St., now the home of Ironton attorney Mack Anderson and his family. Originally it was built in 1900 by Ironton author and poet Mary White Slater, who brought an architect from Cincinnati to design the house.

“She lived here until the early 1950s,” Anderson said. “We are only the fourth family to live here.”

Before the Andersons, living there was Nonnie Bartram, one of the founder’s of Bartram & Son markets, who bought the house from the Slater estate.

Inside the two-story house oak hardwood floors feature a parquet design with solid wood shutters on the first floor windows.

The home sits on land that was once the backyard of the house on the corner of Fourth and Washington streets, at one time the home and office of Ironton physician Dr. Ralph Massie.

“That house and the one Kevin Waldo owns were built by riverboat captains in the 1850s,” Anderson said. “When those houses on Fourth were built, there was no downtown and no floodwall. You could overlook the river. In the late 1800s and 1900s they sold off the back yards.”

Those back yards were turned into the sites for four houses that now face Fifth Street.

“We converted the maid’s room into a master bath to connect with the master bedroom,” Anderson said. “We modernized the kitchen with cherry cabinets and granite countertops.”

When the Andersons moved in in 1983, the section from Washington to Quincy from Fourth to Sixth was zoned R-2, meaning the houses could be turned into apartments.

“I went around with petitions to rezone it to R-1 to only allow single-family residences,” Anderson said.

In 1985 Ironton City Council voted to rezone the neighborhood to R-1.

“You have seen people investing in these homes,” Anderson said. “Someone is not going to buy a house if the one next to them could be turned into five apartments. There’s been a turnaround in the investment in this section.”

Also on the tour was what is now the sanctuary for the Church of the King at the corner of Fifth and Monroe streets. It was originally the home for the congregation of the German Methodist Episcopal Church organized in 1860 as a mission church for one of the pig iron furnace communities. The structure was built in 1884 and until 1905 all services were conducted in German. The large stained glass window facing Monroe Street was donated by Col. H.A. Martin.

Another house on the tour was 615 S. Fifth St., today the home of Ironton attorney Craig Allen and his wife, Carol. The house was built in the late 1890s by J.B. Stroble, who was appointed as Ironton’s postmaster by U.S. President William McKinley.

“It is a house where there has always been a family in it and stayed for a long period,” Carol Allen said.

Before the Allens Dr. John Mayer, a radiologist with area hospitals, lived there.

“It has a beautiful staircase as most of these homes do,” Allen said. “There are ceilings 12 foot tall with crown molding.”

The staircase is built in two levels with elaborate newel posts. There are leaded glass windows in the front of the living room and side porch. And a previous owner remodeled the kitchen to raise the floor 16 inches to give his wife a special gift.

“There are two distinct steps up to the kitchen,” Allen said. “That is so his wife could look out the kitchen window. The house is homey, big and gives us room to move around.”

SCOTTOWN — This is not your grandpa’s bluegrass festival. Thousands have swarmed Eden Valley Farm in Scottown in the past... read more