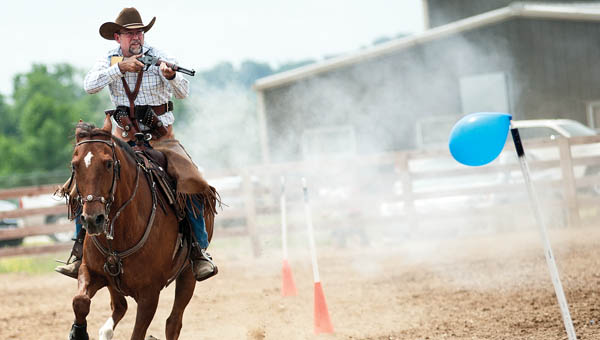 It has been a lot of work to get to this point, but members of the Lawrence County Horseman’s Association said it was well worth it see the fruits of their labor Saturday.

“It feels good,” said Jerry Boggs, LCHA board member. “This is what we have been shooting for.”

Saturday marked the grand opening for the LCHA’s new horse arena in the South Ironton Industrial Park. Group members and volunteers started work on the arena in October, a site they say can bring tourism to the area thanks to donations from local citizens and businesses.

And Saturday was a daylong event to highlight the 128-foot by 280-foot arena’s potential.

“This is an exhibition,” said Flint Adkins, LCHA chairman of the board. “We are showing everyone what we do and what we can do.”

People young and old watched as riders dressed in period clothing from the 1800s rode through the arena for the cowboy mounted shooting demonstration.

Riders tested their accuracy by shooting black powder blanks at balloons while riding their horses at high speeds. Very few balloons were missed.

Renee Jones, secretary of the LCHA, showed the spectators a cowboy challenge demonstration. Atop her horse, Jet, Jones lassoed a (fake) cow’s head and tested the animal with some unfamiliar obstacles.

Aubrey Carey, vice president of the LCHA, gave a barrel racing demonstration, weaving gracefully around the barrels on her horse.

“I’m a cowboy from way back,” Blankenship said, noting he had grown up riding horses, but it had been a few years. “… It’s kind of like riding a bike. Kind of.”

Blankenship praised the work of the LCHA for bringing the arena to the city.

“I think it’s a good thing,” the mayor said. “Tourists can come from all over the Tri-State and from other states. It’s a good family-oriented organization.”

Blankenship also encouraged people to come out to future events at the arena.

Adkins said he was confident that tourists who come to the arena’s events will help boost the local economy by buying food, gas and shopping in town.

Monthly open horse shows begin June 8 and are scheduled through October. Times are still to be announced. To see a schedule of events, visit the group’s website at http://lchaohio.webs.com

The group is also accepting new members. Dues are $25 for a family and $10 for grandparents. The organization meets the first Thursday of each month at the VFW Post 8850 in Ironton at 7 p.m.