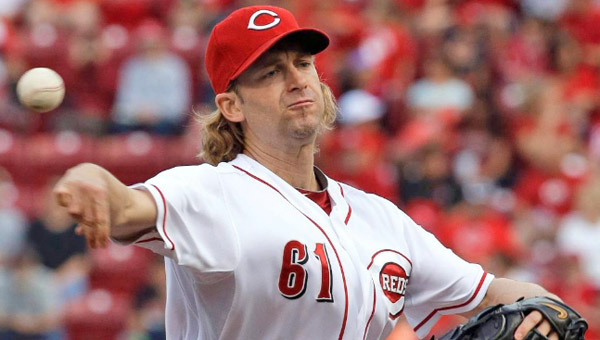 CINCINNATI (AP) — Bronson Arroyo’s first pitch of the game clocked 70 mph on the Great American Ball Park radar gun. The next two came in at 72 and 72 mph.

Nothing special there, except the Rockies couldn’t touch ‘em.

Arroyo limited the NL’s most prolific offense to four singles in eight innings, and Jay Bruce had a two-run homer among his three hits, leading the Cincinnati Reds to a 3-0 victory over Colorado on Monday night.

The Reds have three shutouts in their last four games. They’ve blanked out six of their last 21 opponents, tying them with St. Louis and Pittsburgh for the league lead with nine shutouts this season.

Arroyo (6-5) allowed only one runner to reach second base while throwing 86 pitches that sometimes seemed oh-so-slow.

“I didn’t have amazing stuff,” Arroyo said. “Things just worked out. It was one of those games. I was able to keep guys off second base. Had some quick innings, kept my pitch count down. Some days the ball bounces your way.”

Arroyo wasn’t amazing, but the results were impressive.

“He kept them off balance,” manager Dusty Baker said. “He had good command of his pitches. He was able to put his fastball where he wanted. That’s a tough ballclub to shut out. Bronson was masterful.”

Aroldis Chapman took the radar gun to a different level in the ninth, hitting 100 mph while fanning three and walking one. The left-hander got his 15th save in 17 chances.

Bruce scored on Todd Frazier’s single in the fourth inning off Tyler Chatwood (3-1) and hit his ninth homer off left-hander Josh Outman in the eighth.

The Rockies’ pitching staff had a setback for the second day in a row. Chatwood left with a sore triceps after pitching only four innings. Rockies closer Rafael Betancourt went on the 15-day disabled list over the weekend with a strained groin.

Chatwood batted in the fifth, bunted and was thrown out. Rob Scahill had been throwing in the bullpen and replaced Chatwood, who threw 64 pitches and allowed four hits and one run.

Chatwood felt pain on a pitch in the third inning and it bothered him whenever he threw a fastball in the fourth. They took him out as a precaution to get treatment. It’s unclear whether it will force him to miss a start.

“They seem to think it’s not serious, just a little inflammation,” Chatwood said. “I’ve had soreness, but I’ve never had this kind of soreness. It was a little different.”

The right-hander was coming off one of his noteworthy starts. He fanned a career-high 10 in six innings against Houston.

Arroyo came in with a 4-8 career record against the Rockies, but kept them off balance from the start. The Rockies lead the NL in runs, but couldn’t do much with Arroyo’s unorthodox approach.

“He’s tough, Arroyo,” manager Walt Weiss said. “He’s good at reading swings and going back and forth and changing sequences and speeds.”

The Reds have gone only 3-3 in the past week because of a slumping offense. They used a couple of well-placed hits to get a run in the fourth.

Bruce went the opposite way to left field, beating Colorado’s infield shift, for a single with two outs. He stole his first base of the season and came around when Frazier flicked a low-and-away pitch to left field, one hand leaving the bat as he made contact. Bruce scored as Carlos Gonzalez’s throw to the plate hit him in the back.

“That’s one, already,” Bruce said of his steal. “I’m just trying to play the game. In that situation, you do everything you can to get to second and into scoring position, and it paid off.”

Zack Cozart singled in the eighth ahead of Bruce’s homer, extending his hitting streak to a season-high eight games.

NOTES: RHP Juan Nicasio (4-2) makes his first career start against the Reds on Tuesday. Homer Bailey (3-4) starts for the Reds. … Plate umpire Kerwin Danley took a deflected pitch off his facemask in the bottom of the first inning and needed a couple of minutes to recover. He left the game after the second inning, with Lance Barksdale moving from first base to behind the plate. Danley said he had a headache and would likely miss Tuesday’s game. … Reds 2B Brandon Phillips missed his second game after being hit by a pitch from Pittsburgh’s Tony Watson on Saturday. Baker said Phillips’ forearm is still very sore. Cesar Izturis started at second.

CINCINNATI (AP) — Plate umpire Kerwin Danley was hit on the facemask by a deflected pitch on Monday night and... read more