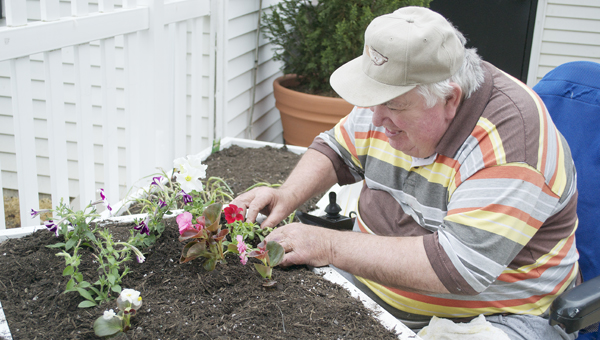 COAL GROVE — As he wiped off the dirt from his hands and shirt, Bethel Caudill said it had probably been 10 years since he had planted his own garden.

The excitement of getting his hands dirty again woke him up early, he said. The Sunset Nursing Center resident was out at 8 a.m. Monday morning to get the raised beds ready for his fellow residents to work.

“I’m looking forward to the tomatoes the most,” Caudill said. “I used to make tomato sandwiches … some bread, mayonnaise and tomato. I loved it.”

Caudill was raised on a farm in Harlan County, Ky., so while it has been awhile since he planted a garden, he said he still has the touch.

“Our maintenance supervisor built us these flower and vegetable boxes so the residents could plant things just like they used to at home,” Horn said.

“We asked the residents what they wanted and then went to Lowe’s to buy it.”

This was the center’s first garden, Horn said. She said the excitement shown by the center’s 47 residents has already brought up the discussion of expanding the garden next year.

Sunset Nursing Center is a long-term care facility located off of Marion Pike in Coal Grove.

An 18-year-old Ironton man and a juvenile, also from Ironton, entered not guilty pleas on Monday in Lawrence County courts... read more