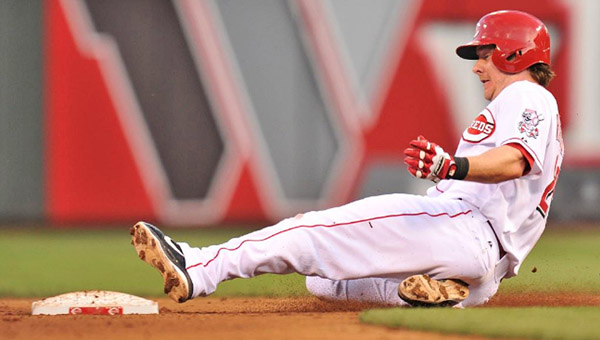 Cincinnati catcher Ryan Hanigan slides safely into second base with a run-scoring double during Tuesday’s game. The Reds were unable to hold onto a 4-3 lead as the Colorado Rockies rallied in the eighth inning to win 5-4. (Photo Courtesy of the Cincinnati Reds.com)

Troy Tulowitzki hit a two-run homer off Sam LeCure in the eighth inning Tuesday night, and the Colorado Rockies held on for a 5-4 victory that ended their streak of six consecutive losses to Cincinnati.

This one stung a lot.

LeCure (1-1) retired the first two Rockies in the eighth before walking Carlos Gonzalez and going to a full count on Tulowitzki, who got the fastball he was expecting. A fan caught the ball by the top of the wall, and the umpires initially ruled fan interference, giving Tulowitzki a double.

The umpires needed only a minute to watch the video and see that the fan with a glove had caught the ball above the top of the wall. They awarded Tulowitzki his 13th homer.

Reds manager Dusty Baker went with LeCure instead of Jonathan Broxton in the eighth because he was already warming up and has pitched well lately. LeCure hadn’t allowed a run since May 5.

“As a reliever, the later you’re in the game, the better,” LeCure said. “Today just wasn’t my day. I’ve been throwing the ball well, and people kept reminding me of that, and I kept saying, ‘Someday, it’s going to end.’ It didn’t have to be today.”

Broxton failed to hold a 4-2 lead in the eighth inning on Sunday in Pittsburgh, giving up a two-run homer to Garrett Jones. The Pirates won it 5-4 in 11 innings.

“Those are real tough,” Baker said. “You hate to keep losing on home runs.”

Nobody was happier about the homer than reliever Edgmer Escalona, whose mental lapse gave the Reds a go-ahead run in the seventh. Escalona tried the third-to-first pickoff fake which was outlawed before this season, resulting in a balk that gave the Reds a 4-3 lead.

“I figured at some point this year, somebody was going to do that with the new rule,” Rockies manager Walt Weiss said.

Josh Outman (2-0) fanned Joey Votto and Jay Bruce to end that rally. Rex Brothers pitched a perfect ninth for his second save. The left-hander is filling in as closer with Rafael Betancourt sidelined by a strained groin.

The Rockies are 2-6 against the Reds over the last two seasons.

Colorado pulled ahead 3-0 against Homer Bailey, but couldn’t hold on. Juan Nicasio gave up three runs in six innings, with Ryan Hanigan driving in a pair.

Bailey was coming off his worst start of the year. He lasted a season-low 3 2-3 innings during a 7-1 loss in Cleveland on Thursday, when he gave up seven runs with two outs in the fourth.

The right-hander had another bad inning against the Rockies, who scored three times in the second. Jonathan Herrera doubled home two runs, and Dexter Fowler singled home another run with two outs. Bailey then settled in, retiring the next 13 batters.

Todd Frazier led the Reds’ comeback. He extended his hitting streak to five games with a double in the second and scored on Hanigan’s groundout. Frazier doubled again, driving home a run in the fourth, and came around on Hanigan’s double to tie it 3-all.

Frazier, who finished third in NL Rookie of the Year voting last season, has pulled out of his slow start by batting .352 in his last 16 games.

NOTES: The Rockies sent starter Tyler Chatwood back to Denver for an MRI on his sore right triceps, which forced him from a 3-0 loss to the Reds on Monday night in the fifth inning. Chatwood is expected to miss at least his next turn. A medical exam was encouraging. … Reds 2B Brandon Phillips missed a third straight game with a bruised left forearm. He took batting practice and said the arm felt better. He’s expected back on Friday for the opening of a series against first-place St. Louis. … Umpire Lance Barrett filled in for Kerwin Danley, who was hit on the facemask by a deflected pitch and left the game with a headache on Monday night. … RHP Johnny Cueto (3-0) makes his fourth start since coming off the DL in the series finale on Wednesday. RHP Jon Garland (3-6) starts for the Rockies.