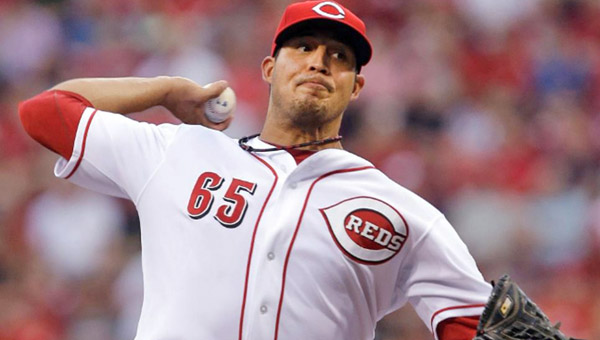 Cincinnati recalled pitcher Pedro Villarreal to take injured Johnny Cueto’s spot in the rotation Wednesday but he was knocked around as the Colorado Rockies routed the Reds 12-4. (Photo Courtesy of the Cincinnati Reds.com)

CINCINNATI (AP) — Pedro Villarreal’s excitement about being back in the majors didn’t last very long.

The right-hander was called up Wednesday to fill in for injured Cincinnati ace Johnny Cueto, and he got hit hard in his first big league start. Carlos Gonzalez hit two of his three homers off the rookie, and Colorado piled up six in all for a 12-4 victory over the Reds.

Gonzalez tied his career high with the three homers, and Troy Tulowitzki went 5 for 5 with a pair of homers as one of the NL’s top offenses took advantage of one of the league’s best pitching staffs.

The Rockies hadn’t hit six homers in a game since they had that many against the Marlins on July 4, 2008, according to STATS LLC.

“The young kid had a rough night,” manager Dusty Baker said. “He was leaving balls up in the zone and out over the heart of the plate. You do that and you’re in trouble.”

Gonzalez got Colorado’s splurge going with a solo shot and a three-run homer off Villarreal (0-1), who was brought up from Triple-A because Cueto had lingering problems with a muscle in the back of his pitching shoulder.

“I was just glad to be up here to pitch,” said Villarreal, who was called up at the end of last season and made one relief appearance. “Obviously, they’re a good ballclub and they showed it today.”

Gonzalez was mentally ready to face Cueto, against whom he is 4 for 10 with a homer. Instead, he got a young pitcher just trying to throw strikes.

“It’s a weird feeling,” Gonzalez said. “Sometimes you like facing a guy you’ve seen a few times rather than a guy you’ve never seen before. Tonight we saw a lot of pitches in the strike zone.”

Tulowitzki tied his career high with five hits, including a two-run homer and a solo shot. Todd Helton also homered as the Rockies piled up a season-high 20 hits, the most allowed by Cincinnati since 2009. The Reds came in with the second-best earned run average in the NL.

Colorado’s Jon Garland (4-6) gave up four runs — all in the first — and lasted six innings.

The Rockies took the last two games of their series, ending a streak of six straight losses against Cincinnati. Colorado is 3-6 against the Reds over the last two seasons.

The Reds put Cueto on the 15-day disabled list before the game, the second time this season that their top starter has been sidelined by a strained muscle in the back of his shoulder. Cincinnati’s top starter was out from April 15 to May 19 with the injury.

Villarreal was promoted instead of left-hander Tony Cingrani because it was his turn to start at Triple-A Louisville. He lasted only 3 2-3 innings and allowed 10 hits and six runs.

Gonzalez’s three-run homer in the fourth — one that went an estimated 476 feet — gave him 10 multihomer games in his career, including two this season. He added a two-run shot in the eighth off Manny Parra. He also hit three in a game against Houston on May 30 last season.

Garland also had a rough time in the first inning, when Xavier Paul hit a three-run shot for a 4-1 lead. Garland is one of the NL’s best at getting ground balls. After Paul’s homer, he retired 13 of the next 17 batters on grounders or strikeouts.

Reds second baseman Brandon Phillips missed his fourth straight game with a bruised left forearm, which was hit by a pitch. He’s expected back for a weekend series against first-place St. Louis.

NOTES: An MRI on Rockies starter Tyler Chatwood found nothing more than inflammation in his triceps. He’s expected to miss one start. Chatwood had to leave his start on Monday in Cincinnati during the fifth inning because of soreness in the triceps. … Rockies CF Dexter Fowler was sick and out of the starting lineup. … Reds OF Chris Heisey plans to start a rehab assignment on Friday at Triple-A Louisville. Heisey has been on the disabled list since April 29 with a pulled right hamstring. … Bengals players took batting practice before the game. They’re holding supervised workouts this week.

BEREA (AP) — For the first time since 1999, the Cleveland Browns will have a new kicker this season. NFL... read more