Sometimes it’s the little things that make the biggest impact.

And it is because of those little things — serving meals, visiting hospital patients and praying — that Ed and Linda Holmes were chosen as Lawrence County’s 2013 Senior Citizens of the Year.

The couple said they were surprised by the honor because they are just giving back to their community.

“We are just giving back,” Ed Holmes said. “And I’m honored because my mother was part of the Senior Citizens of Lawrence County for years. She really 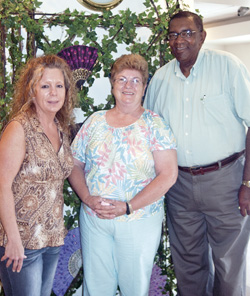 From left to right are Melinda Russell, Ironton Senior Center Director, and Linda and Ed Holmes. The Holmeses were chosen as the 2013 Seniors of the Year for their volunteer work at the center.

enjoyed it and she was active in it for 25 years. I do it in memory of her. It’s a privilege to be able to help out.”

Holmes, 64, has been going to the Ironton Senior Center since he retired as plant manager of the Russell Locomotive Shop four years ago. His wife followed two years later after she retired as the environmental manager for CSX.

Rather than spend retirement staying home and watching TV, the couple chose to help at the senior center and around the community.

“We are grateful here at the center to have such wonderful people like Ed and Linda Holmes who express their love, kindness, friendship and would help the center in anyway possible,” said Melinda Russell, director of the center.

The couple is the youngest senior attendees at the center, but use that as a way to help those who need it.

They have helped serve the congregate lunch meals at the center, called and checked in on seniors who miss a day at the center, visit seniors in the hospital, help the seniors get to their apartments if needed, pray for them, and sometimes, just give an encouraging word to those who need it.

“Eddie is a real people person,” Linda Holmes said of her husband. “If somebody is sick, or having a problem, he will go and talk with them and have a prayer with them.”

“If we hear of something they (the center) are in need of, we’ll do it,” he said. “It’s just a joy. We look forward to it. Some weeks we come five days. When we are not here, we are going to get a phone call. They want to know ‘Where are you? Are you OK?’”

The Holmeses have also helped to fill in the gap where funding is lacking for the center, sometimes by cooking meals or donating coffee.

“In some cases, this is their main meal of the day,” Holmes said. “And if we don’t have this, we have concern about whether they will get a proper meal. When we come down here we come to help out. If they have enough food, we always try to eat last. They don’t, I can leave and go get me some. There are some that don’t have the means to do that.”

Both agreed that the senior center is a vital part of the community that shouldn’t go under funded.

“It is something these ladies and gentlemen look forward to,” Linda Holmes said. “Especially when you have a single senior, just the comradery. I know there are several people here who have lost their spouses in recent years. It gives them an opportunity to feel like a part of something rather than sitting at home. … We would encourage everyone to support the efforts to keep funding for the senior programs because it’s something that’s important to so many of the people. And we have a large senior community in Lawrence County.”

Next week the Holmeses will travel to Portsmouth for a special brunch at the Area Agency on Aging to be honored.

The couple insisted that helping in the community is important to them.

Change orders totaling $4,387.53 on three landslide repairs were among the items on the Lawrence County Commission’s agenda at... read more