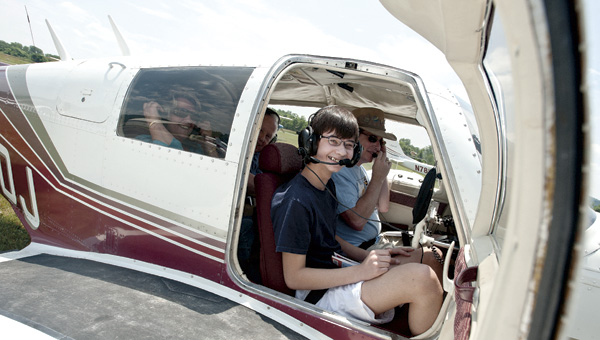 Jack Pancake, 13, of Ashland, Ky., sits in the co-pilot’s seat before taking off in a four-seat airplane with his grandmother, Glenda Marshall, and friend, James Murphy, Saturday at the Lawrence County Airpark’s Community Plane Ride Day.

CHESAPEAKE — As pilot Joey Johnson taxied his Cessna-172 Skyhawk around to the runway at the Lawrence County Airpark, he gave some assurances to his single passenger.

“It may get bumpy, but we’ll keep flying,” Johnson said, noting the possibility of air pockets in the sky, like pot holes that you can’t see. “Nothing to be nervous about.”

Nose pointed straight down the runway, Johnson checked the plane’s ignition system with a pre-takeoff magneto check. Everything was in order.

Then, advancing the throttle to about 55 miles per hour and pulling back on the plane’s yolk, the ground dropped out from underneath the Cessna.

Flying south of the Ohio River at about 2,000 feet, the homes in Huntington, W.Va., looked small compared to the surrounding green, rolling hills.

It was a bird’s-eye view that many had the opportunity to see Saturday as the airpark hosted a Community Plane Ride Day to raise awareness and support for the more than 80-year-old site. Attitude Aviation sponsored the event.

“It gives so many people an opportunity to fly in an airplane that have never flown,” Johnson said.

The 60-year-old from Huntington got his start at the airpark about 14 years ago when he decided to take flying lessons, like many of the other members of the Tri-State Pilots Association.

J.D. Smoot, vice president of the TSPA, grew up right across the street from the airpark and can still remember the day his father brought him for his first ride at age 13

“There were all kinds of emotions,” Smoot recalled of his flight in the Cherokee 180. “Excitement, nervousness, fear.”

The pilot even let the Smoot hold the stick and steer the plane.

“I was bitten by the bug,” Smoot said.

Now 32 years old, the Chesapeake resident has been a pilot for about three years and said the Community Plane Ride Day is way to raise money to keep the airpark maintained.

“We try to be self-sufficient so we don’t have to cost the county any money,” Smoot said.

The day is also a good way for children and adults to cultivate a love for aviation.

Mike and Teresa Waller, of Franklin Furnace, brought their two children, Kelsie, 7, and Blake, 11, for a day of fun.

“We though it would be something good for the kids to do. Something fun,” Teresa Waller said.

The Wallers said their children have flown commercially, but never in a smaller aircraft. The two little ones were understandably apprehensive.

“Getting down,” Blake said when asked what he thought the best part of the flight would be.

Kelsie was a bit too nervous to answer such questions.

But by the time their 25-minute flight over the Tri-State had ended, both children were smiling from ear-to-ear.

Blake said he liked being able to look at everything down below, while Kelsie said she enjoyed seeing the other planes in the sky.

Thirteen-year-old Jack Pancake, of Ashland, Ky., and his grandmother, Glenda Marshall, of Ironton, came out to the airpark with family friend James Murphy to experience a flight in a Mooney aircraft.

This would be Jack’s first flight ever and one he said he was nervous about.

While the three waited for their turn, they looked skyward to see a group of skydivers descend.

“This airport needs to be here,” Murphy said. “I took my first airplane ride here.”

Once Jack was back on the ground and out of the plane, he still seemed on top of the world.

Hank Sims, recently elected president of the TSPA, got his license at the Lawrence County Airpark in 2006. It was something Sims said he always wanted to do.

Sims said the airpark was of benefit to the county.

“It’s a huge benefit how close it is to the Point,” Sims said. “It is perfect for attracting business.”

Saturday was also an opportunity for supports of the airpark to sign a petition to save the site. Recently the Lawrence County Commissioners have considered whether the site could be commercially developed.

The TSPA are already planning another Community Plane Ride Day for the fall. A date has not yet been determined.

Maureen Klein talks about living with only the basics, possibly no electricity or running water and limited contact with family... read more