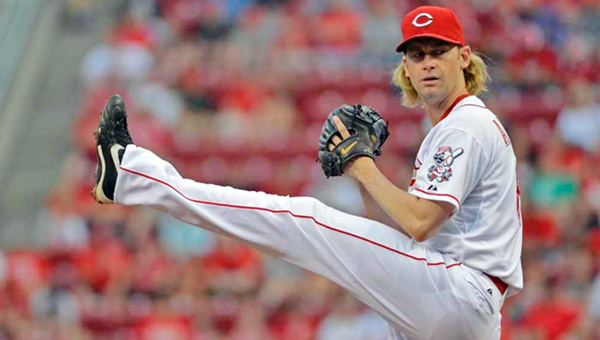 Cincinnati pitcher Bronson Arroyo threw six strong innings, but the Reds failed to hold the lead as they lost 11-4 in 10 innings to St. Louis. (Photo Courtesy of The Cincinnati Reds)

CINCINNATI (AP) — Bronson Arroyo feels pretty confident when the Cincinnati Reds take a lead into the late innings against anybody except the St. Louis Cardinals.

St. Louis showed why on Sunday night, scoring twice in the seventh inning to tie the score before the Cardinals broke through for seven runs in the 10th of an 11-4 win.

“These guys are never out of a ballgame,” said Arroyo, who started and went six innings before leaving after his right leg stiffened up, the result of getting smacked on the knee by Daniel Descalso’s sharp one-hopper to end the fourth. “Against some teams, when you lead, 4-2, in the late innings, you feel like the game’s over. This team fights you — the whole lineup. Every guy in the lineup has a hitting streak. It’s not easy to navigate nine innings.”

Ten is even harder. Matt Holliday’s grand slam capped the seven-run 10th, giving the Cardinals a win that means they now have won or split 13 consecutive series.

J.J. Hoover (0-5) walked Allen Craig to lead off the 10th. One out later, David Freese singled Craig to second, extending his career-best hitting streak to 19 games, tied with San Francisco’s Marco Scutaro for the longest in the National League this season.

Descalso followed with his RBI double off the left field wall. Matt Carpenter added two insurance runs with a bases-loaded single before Holliday hit his homer — a 464-foot shot into the left field seats off Curtis Partch, who was making his major league debut. The homer was Holliday’s 10th of the season.

Trevor Rosenthal (1-0) had four strikeouts in two perfect innings to get the win, giving St. Louis five straight series wins over the Reds.

Manager Dusty Baker agreed that it was disappointing.

“It’s hard not to be disappointed,” said Baker, whose team fell four games behind Central Division-leading St. Louis. “You have a game that you lead in the late innings, you’ve got to find a way to hold that.”

The Reds grabbed a quick 2-0 lead in the first. Shin-Soo Choo led off with an opposite-field double into the left-field corner and moved to third on Derrick Robinson’s sacrifice bunt. After Joey Votto walked, Brandon Phillips nudged a half-swing bloop single into short right field to drive in Choo and send Votto to third. Votto scored on Jay Bruce’s sacrifice fly.

St. Louis tied it in the fourth. Carlos Beltran led off with his 14th home run of the season, a 409-foot blast to center field on a 3-1 pitch. Holliday followed with a double and scored one out later on Yadier Molina’s opposite-field double into the right-field corner.

A two-run fifth gave the Reds a 4-2 lead. Choo led off with a single to right and Robinson was nicked by a pitch while squaring to bunt. Votto struck out and Choo moved to third on Phillips’s fly ball to center field before Bruce lined a two-run double into the right-field corner.

Arroyo, who has never missed a start in his major league career, got through the fifth inning, but his leg stiffened, forcing Baker to go to his bullpen earlier than anticipated.

“We didn’t want to take Bronson out,” Baker said. “That ball wasn’t hit that hard, but it got him right on the bone, and it tightened up.”

Arroyo had thrown only 84 pitches and said he could’ve gone longer except for the leg.

“In the fifth, I didn’t feel it,” he said. “When I went out for the sixth, I had a hard time putting weight on it. I felt strong, but I felt it was better to turn it over to the bullpen then instead of making them come in with runners on base.

The Cardinals jumped all over reliever Sam LeCure to tie the score again in the seventh. Jon Jay led off with a single, his third hit of the game, and went to third on pinch-hitter Matt Adams’s double to center that Choo got a glove on but couldn’t hold. Jay scored and pinch-runner Shane Robinson went to third on Carpenter’s single. Beltran greeted reliever Alfredo Simon with a game-tying sacrifice fly.

Notes: Cardinals RHP Jake Westbrook, on the disabled list since May 9 with right elbow inflammation, started for Single-A Peoria on Sunday, perhaps the last step toward being activated. Westbrook could be ready to pitch in “4-5 days,” manager Mike Matheny said. … St. Louis RHP Chris Carpenter, who’s missed the entire season with a right shoulder injury, is scheduled to pitch “lengthened” bullpen sessions and face batters when the Cardinals return from their current road trip, Matheny said. … Reds 2B Brandon Phillips was 1-for-7 in his first two games since missing four after being hit in the left forearm with a pitch. The area remains swollen. “It’s still (messed) up,” Phillips said. “I can catch the ball OK, but handling the bat is tough. I’m going to play through it. It is what it is.”

McFann among winners at annual Run By The River