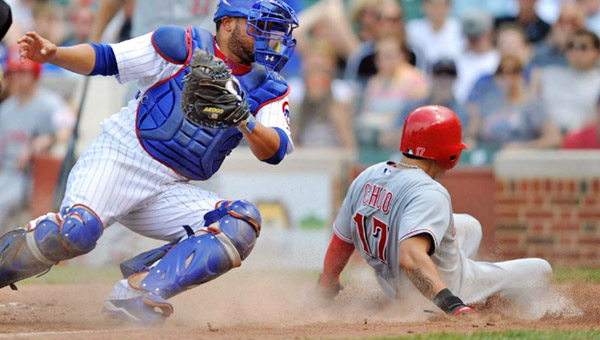 Chicago Cubs’ catcher Welington Castillo is late with the tag as Cincinnati Reds’ Shin-Soo Choo scores the tying run on a single by Brandon Phillips during the sixth inning of Wednesday’s game. Todd Frazier hit a solo home run in the seventh inning to give the Reds a 2-1 win.(Photo Courtesy of The Cincinnati Reds.com)

Leake combined with Aroldis Chapman on a three-hitter and Todd Frazier hit a tiebreaking home run against Wood in the seventh inning, leading the Reds past the Cubs 2-1 Wednesday for their record 12th straight win at Wrigley Field.

Leake (6-3) won for the fourth time in five decisions, allowing only Nate Schierholtz’s second-inning home run into the right-field bleachers, his eighth of the season. The Cincinnati starter gave up one run and three hits while striking out six over eight innings.

Facing Wood, Leake said, is “fun, definitely, and frustrating at the same time.”

“You want him to do well and you want yourself to do well,” Leake said. “Today we both did really well, so you can’t complain.”

“Felt good out there today, was locating pretty well and keeping them off balance,” Wood said. “Leake was doing the same, he had an outstanding game today.”

The Reds usually do quite well against the Cubs, especially at Wrigley Field.

Cincinnati’s Dusty Baker, who managed the Cubs from 2003-06, didn’t have an explanation for the streak at Wrigley.

“I don’t know, man,” Baker said. “Just feel fortunate that it happens when it happens.”

Cesar Izturis got the Reds’ first hit off Wood with an infield single in the fifth, and Cincinnati tied the score in the sixth when Shin-Soo Choo doubled and scored on Brandon Phillips’ two-out single.

Leake retired 12 consecutive batters before Darwin Barney singled with one out in the eighth. By then, Frazier had hit his eighth homer, sending a 1-0 pitch through a wind and into the left-field bleachers, giving the Reds a 2-1 lead.

Frazier has homered in consecutive games since Baker gave him the day off Monday to “study and watch” what was happening.

“Just trying to find different release points, trying to pick up pitches,” Frazier said he did on his day off. “It’s really hard to do, but at the same time it keeps you concentrating on the game the whole time.”

Chapman struck out two in a perfect ninth for his 17th save in 19 chances to give Cincinnati its third straight win since losing two of three last weekend to first-place St. Louis.

“St. Louis is a good team. They’re a battle every time, so I don’t think we really got down because we know they’re a good team, we know they’re going to be tough,” Leake said. “We just have to take advantage of games that we need to really work hard. It’s definitely good we’ve gotten three in a row from them.”

Not much has been going that way for the Cubs.

They’ve lost eight of 10 since a five-game winning streak, and fell to a season-worst 13 games below .500. In their last five losses they’ve scored a combined seven runs.

“It’s a broken record,” Cubs manager Dale Sveum said. “Woody’s just pitched another great game and has nothing to show for it.”

Unfortunately for the Cubs, that’s usually how it goes for them against the Reds at Wrigley.

NOTES: Chicago’s Starlin Castro went 0 for 3 and is in a 4-for-48 slide (.083). He hit in the No. 6 slot for only the second time in his career. … Choo, normally the Reds’ leadoff hitter, was second in the batting order while Derrick Robinson was first. Choo entered 0 for 6 with four strikeouts against Wood. … The Cubs placed RHP Zach Putnam on the 15-day DL and recalled LHP Brooks Raley from Triple-A Iowa. … When asked if LHP Tony Cingrani would stay in the Cincinnati rotation, Baker said “Who’s spot is he going to take?” Cingrani gave up two earned runs in seven innings Tuesday, but the Reds hope Johnny Cueto will be able to return Sunday against Milwaukee. … Alfonso Soriano pinch hit and had a game-ending groundout. … Thursday’s pitching matchup is Cincinnati’s Mat Latos (6-0, 2.87) against the Cubs’ Jeff Samardzija (3-7, 3.18).

Dalton becomes more of leader in his third season

CINCINNATI (AP) — Coach Marvin Lewis saw Andy Dalton in the white cinderblock hallway as he made his way to... read more