Repairing damage not as simple as in with the new 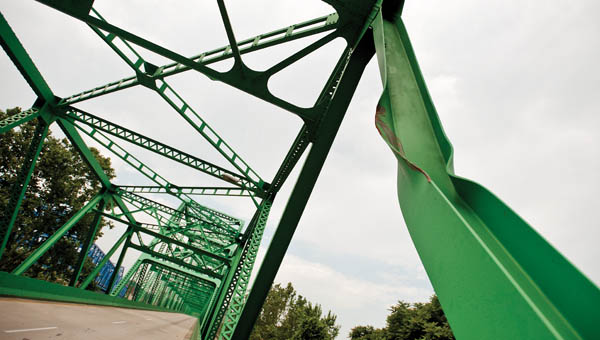 Shown is worst of the visual damage to the Ben Williamson Bridge following a one vehicle incident on May 17. (

For almost a month the apple green 25-foot diagonal I-beam, three in from the west edge of the Ohio entrance ramp to the Ben Williamson Bridge, has stood crumpled as if an angry giant had grabbed it in the middle and wouldn’t let go.

The damage has meant more than an aesthetic blot on the face of the 1931-built structure that routes traffic from Coal Grove to Ashland, Ky. It has meant a complete shutdown of the bridge as vehicles are now routed over one lane of the neighboring Simeon Willis Bridge, which until now only carried motorists into Ohio.

Fixing it would seem as simple as taking out the crumpled beam and replacing it with a new one. However, the reality is not that straightforward.

The reason is that, while the bridge no longer carries the weight of trucks and cars crossing over it, it still is holding something up — itself.

“The weight of the bridge is still here,” Dean said.

That means the metal framework is in a constant dance of compression and expansion.

The bridge, which once carried traffic two-ways from Ohio to Kentucky, is built using the truss system. Those criss-crosses of steel above the roadway are there not for decoration but to make the bridge work.

When a car or truck crosses on the bridge, the weight of the vehicle is first transferred through the roadway into the supporting steel structure underneath. That is immediately transferred back up past the road onto the diagonal I-beams above and back down until that energy reaches the nearest concrete pier that the roadway rests on. That pier then absorbs all the energy.

The scenario repeats itself all the way down the roadway of the bridge. It also happens whether there is anything on the bridge or not.

“The bridge is under load,” Allen Blair, public information officer for the Kentucky cabinet, said. “The force is acting on the beams now even without traffic.”

Changing out that beam is harder than just snipping out the old and slapping back in the new.

“This is why we have contracted this out,” Blair said. “We have to do the work while protecting the structure and not cause further damage. It has to be delicately done. It is more complicated than taking it out and putting it back in.”

On Friday at 10:30 a.m. bids for the work will be opened. When those bids are checked out, a contract may be awarded with the cabinet’s goal to get the work finished by July 31.

When the work starts, one of the first things to happen will be attaching air-driven jacks to support the bridge substructure.

“With that underneath it will jack up the roadbed,” Dean said.

Then the rivets attaching the gusset plate with the beam will be pulled out.

As that is going on the new beam will be fabricated.

Next will be taking out the damaged beam and putting in the new one.

“We’d like to find weather the same for three days to take the beam out,” Dean said.

With temperatures the same for a specified period the expansion and contraction of the structure would be at a minimum.

“The beam should slide in,” Dean said.

Since the damage happened, eyewitnesses have come forward whose accounts have pinpointed the accident to 7:30 a.m. May 17, although officials were not aware of the damage until four days later. Since the damage is so high up the beam, a commercial truck is believed to have caused it.

“We have a description of the truck, but not the license plate to narrow down the search,” Lt. Barry Call, commander of the Ironton Post of Ohio State Highway Patrol, said.

“We are still waiting on resources to become available to review.”

The patrol is reviewing video from surveillance cameras near the bridge.

“There are other avenues to explore,” Call said. “If we do get the driver, we will forward the case to the prosecutor. Ultimately it is his decision.”

Blair said Kentucky is working with the patrol’s investigators.

“We will take appropriate action,” he said.

SOUTH POINT — A South Point man will spend the next 10 years in prison following his guilty plea to... read more