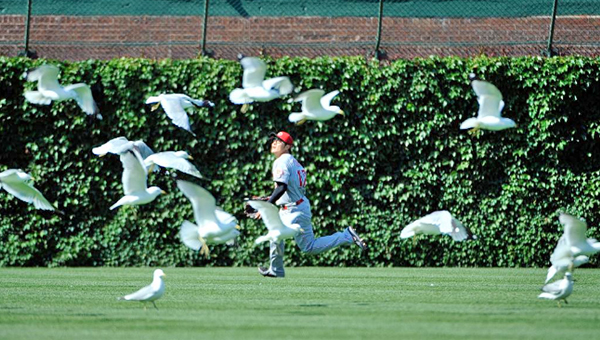 Cincinnati Reds’ centerfielder Shin-Soo Choo chases down a fly ball off the bat of Chicago’s Welington Castillo in the eighth inning on Thursday amidst a flock of birds. The Reds lost 6-5 in 14 innings. (Photo Courtesy of The Cincinnati Reds)

CHICAGO (AP) — The Cincinnati Reds couldn’t get one more scoreless inning from their bullpen, and it cost them their record winning streak at Wrigley Field.

Pinch-hitter Julio Borbon singled home the winning run off Jonathan Broxton with two outs in the 14th inning and the Chicago Cubs beat Cincinnati 6-5 on Thursday to end the Reds’ 12-game winning streak at Wrigley.

Cincinnati hadn’t lost in Chicago to the Cubs since last August 9 and was within one game of its first four-game sweep at Wrigley since Aug. 16-18, 1968. The previous record for consecutive victories by a visitor at Wrigley Field was 10, by the St. Louis Cardinals (1943-44) and matched by the New York Giants (1950-51) and Montreal Expos (1982-83), according to STATS.

Instead of using closer Aroldis Chapman in the 14th with the game tied at 5, Dusty Baker went to Broxton (2-2), who the Reds manager said he didn’t want to use because of a sore right elbow.

Baker said he had Broxton “penciled in as a no” but tried to “sneak” him through one inning.

Starlin Castro led off the 14th with a single against Broxton and stole second when Anthony Rizzo struck out. Castro went to third on Alfonso Soriano’s groundout to first base, and Nate Schierholtz was intentionally walked before Borbon came through, ending the longest game of the season for both teams at 5 hours, 7 minutes.

“He was our last, last, last resort,” Baker said of Broxton. “I was even asking guys in case I had to use a position player. Chapman, he warmed up about eight times.”

Baker said Chapman was his “last pitcher to close out the game” so he opted to try and get one inning out of Broxton. The right-hander obliged and almost made it out of the frame before Borbon singled through the left side.

“I did what I could,” Broxton said.

Mat Latos was trying to win his seventh straight decision to start the season for Cincinnati. He allowed four runs and eight hits in six innings and wasn’t happy with his outing, despite leaving with a lead.

“It was just one of those days,” he said.

Latos has won his last 10 regular-season decisions since losing to the Cardinals on Aug. 24, and the Cincinnati bullpen has blown saves in five of his games this season. Even though the Reds allowed Chicago to tie the game in the eighth on Darwin Barney’s two-out single, the Cincinnati relievers were strong.

Cincinnati scored twice in the second on RBI singles by Devin Mesoraco and Shin-Soo Choo and added two in the fifth on run-scoring singles by Joey Votto and Brandon Phillips.

Jay Bruce had four hits for the Reds. Choo reached base three times and scored twice, but Cincinnati still fell 3 1/2 games behind St. Louis in the NL Central.

The Cubs, meanwhile, avoided falling a season-high 14 games below .500 despite Jeff Samardzija allowing five runs and a season-high 10 hits over six innings.

They got a home run from DeJesus and two triples from Schierholtz, while Castro went 3 for 7 after falling into a 4-for-48 slump.

“Everybody did a great job today against a nice lineup,” Cubs manager Dale Sveum said.

Borbon had to wait almost five hours for his chance to help.

“I was ready from probably the ninth inning on, probably even a little earlier just trying to get that opportunity to go up there and help in any way possible,” Borbon said. “It feels pretty good.”

NOTES: Baker and Sveum were both impressed by the pace of Game 1 of the Stanley Cup finals Wednesday night, won 4-3 in triple overtime by the Chicago Blackhawks. Baker went to United Center but left after regulation and said watching the game was an inspiration to return to the World Series. Sveum watched the entire game on TV. … The Reds said it’s possible RHP Johnny Cueto could start Sunday against the Brewers. Cueto has been on the disabled list since June 1 with a strained right shoulder. … Cubs RHP Shawn Camp, on the DL since May 22 with sprained right big toe, is expected to work two innings in a rehab assignment Friday for Class-A Kane County. … Bronson Arroyo (6-5, 3.35 ERA) starts Friday for the Reds against Milwaukee RHP Kyle Lohse (2-6, 4.03). … RHP Edwin Jackson (2-8, 5.76) pitches for the Cubs when they open a series Friday night in New York against Mets RHP Shaun Marcum (0-7, 4.96).

Heat rebounds to even NBA Finals