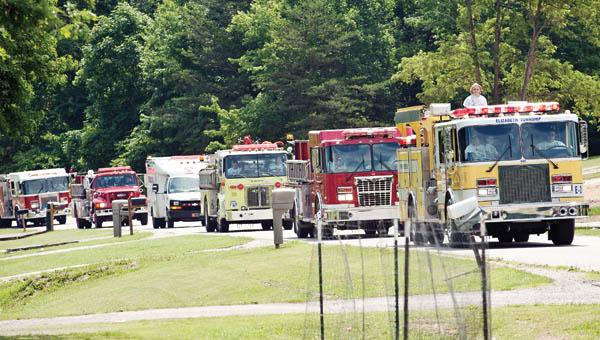 PINE GROVE — The roar of the sirens were first heard. Then came fire trucks, emergency squads and law enforcement vehicles down County Road 26 to salute one of their own.

The parade of emergency and law enforcement cars was the start of the afternoon-long 50th anniversary celebration of the Elizabeth Township Volunteer Fire Department.

After a video historical tribute to the department the celebration began with a dinner that included beans cooked over an open fire and homemade cornbread.

“In 1962 13 homes were destroyed by fire,” said Jerry Massie, department members and one of the organizers of the Saturday event. “They started it when they saw the need.”

The fledgling department began protecting the citizens of Elizabeth Township with a single truck — a 1994 Ford.

Today the department has 30 members on the its roster who offer the community 300 years of experience. Equipment includes two tankers, three pumpers and a rescue truck.

“When this fire department was incorporated, we signed a contract with the trustees that we will offer fire protection to the community,” Massie said. “Our taxpayers have been good to us in paying taxes and voting on the levies. We felt we wanted to give back to our community. We formed a committee to have a celebration.”

CHESAPEAKE — Adding bicycle trails to a streetscape design for the Chesapeake-Braddick neighborhood is part of future plans to upgrade... read more