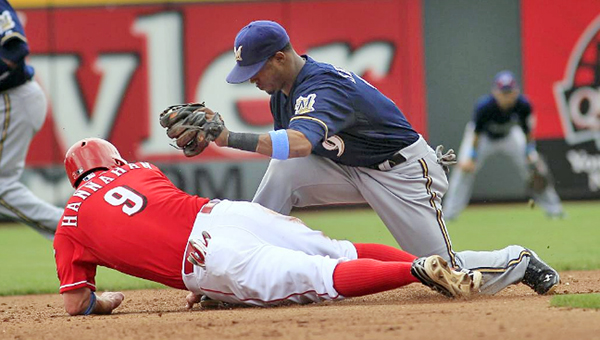 Cincinnati Reds’ third baseman Jack Hannahan (9) dives safely back into second base as Jean Segura tries to tag him in the fourth inning. (Photo Courtesy of The Cincinnati Reds)

CINCINNATI (AP) — Solid pitching from Johnny Cueto was all the Cincinnati Reds were looking for on Sunday.

His deft work with the bat was a bonus.

Cueto pitched six solid innings and drove in a run with a perfect suicide-squeeze in his return to the rotation and Jay Bruce homered to lift the Reds over the Milwaukee Brewers 5-1.

Donald Lutz drove in two runs with a pinch-hit single, and Zack Cozart and Joey Votto each had two hits as Cincinnati rebounded after losing 6-0 on Saturday.

Cueto, activated from the disabled list Sunday, improved to 4-0 in his seventh start of the season. He allowed five hits and one run with three strikeouts and no walks as the Reds took two of three in the weekend series.

“We only had one worry with Johnny Cueto — was his (shoulder) OK,” Baker said. “Other than that, we don’t worry about Johnny Cueto.”

Cueto made his first start since a 6-0 win at Pittsburgh on May 31. He was placed on the disabled list on June 5 for the second time this season because of a strained muscle in his right shoulder.

Alfredo Simon allowed two hits and had six strikeouts in three innings of relief for his first save of the season and second in two years with Cincinnati.

“My breaking ball and two-seamer were working really good,” Simon said. “It was good to give our bullpen a rest.”

Carlos Gomez hit the first pitch he saw — and Cueto’s seventh pitch — into the left-field seats for his 12th homer of the season to give Milwaukee a 1-0 lead.

“In the first inning, I had too many thoughts,” Cueto said through an interpreter. “I was thinking too much. Finally, it was over. When I got to the dugout, Cesar Izturis said, ‘Just do what you normally do. If it breaks again, we’ll fix it.”’

“Johnny hung a slider to Gomez,” Baker said. “That was the only mistake he made.”

The Reds tied it with an unearned run without benefit of a hit in the second. Xavier Paul led off with a walk, and Jack Hannahan followed with a chopper to second baseman Rickie Weeks, whose throw bounced past first baseman Juan Francisco for an error.

Hannahan was forced out, and Paul moved to third on Ryan Hanigan’s grounder. Cueto drove in Paul, who broke for the plate on the pitch, with a suicide-squeeze bunt he said he didn’t see.

“I thought it was going to hit me,” Cueto said. “I closed my eyes.”

Baker had no hesitation about flashing that signal.

“We have confidence in Johnny in almost everything,” he said. “That was a situation where it was threatening to rain, and we wanted to get the lead before it rained.”

Cozart led off the third with a double into the left-field corner, went to third on Votto’s groundout, and scored the go-ahead run on Brandon Phillips’s checked-swing chopper back to Peralta, who dropped the ball and had to scramble and settle for the out at first.

The Brewers couldn’t afford such mistakes with the way Cueto was pitching, manager Ron Roenicke said.

Bruce followed with his 12th homer, a 469-foot drive, that landed two-thirds of the way up the right-field seats. He was more impressed with Cueto’s performance.

“That was very good,” he said. “I think everybody at this point was holding their breath and hoping he could come out of the game feeling good,” Bruce said. “It looks like he did. I’m glad today went well.”

The Reds added two runs with one out in the sixth on Hannahan’s walk, Hanigan’s double off the left-field wall, and Lutz’s pinch-hit single up the middle against Mike Gonzalez.

NOTES: The Reds optioned RHP Pedro Villareal to Triple-A Louisville to make room on the roster for Cueto. … Reds OF Chris Heisey is scheduled to begin a rehab assignment with Triple-A Louisville on Monday. Heisey has been on the disabled list since April 29 with a strained right hamstring. … Milwaukee RHP Marco Estrada is expected to throw a bullpen session Monday. Estrada has been on the disabled list since June 5 with a strained left hamstring … The Reds will open their first home series against Central Division rival Pittsburgh. RHP Mike Leake (6-3) is scheduled to start Monday for Cincinnati. … Milwaukee is off Monday before opening a three-game series in Houston. Alfredo Figaro (1-0) is scheduled to start on Tuesday.