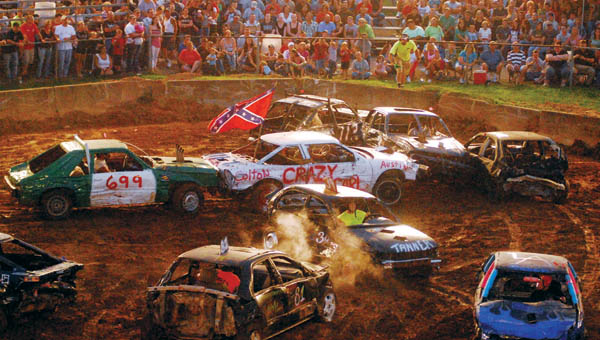 “The fair board has been working non-stop,” Mindy Clark, board secretary/treasurer, said. “We have been working really hard this year to get the grounds cleaned up.”

This year there will be three demolition derbies with thousands of dollars in payouts.

The second will be a Figure-8 Derby, also put on by Smash-It Derby, on Tuesday, July 9.

“It is like a demolition derby but the track is made into a figure 8,” Clark said. “This is really popular at other fairs and we wanted to bring it to our fair.”

“In this competition there is also the hardest hit competition where you put a car in the middle and let each car hit it as hard as they can,” Clark said.

This year the fair will start a day earlier on Friday, July 5 with a tractor pull by American Pullers Association.

Entertainment starts on Monday night with the bluegrass Southern rock sound of the Phillip Fox Band from Westerville.

“They are very popular in the Columbus area,” Clark said.

On Wednesday is David Lee Murphy as the headliner with Generations Band from Proctorville as the opening act. On Thursday is American country artist Chris Cagle, who had the hit, “Let There Be Cowgirls.”

“We are really excited about having Chris Cagle,” Clark said. “He had the No. 4 hit on the radio at the time we booked him.”

Opening act that night is This Side Down, another local band.

“We are bringing back Michael’s Amusements,” Clark said. “They have purchased new rides and we have some new vendors, different type of things we haven’t had before like one that sells boots and belts. That is a perfect place to be, at a fair.”

The 4-H building that was the site of Monty’s Pizza will be the home of a new restaurant, Mom and Pop Diner owned by Richard Parker.

“Everything is homemade and they will have breakfast,” she said. “It is relatively inexpensive food.”

The diner will open the first of July before the fair with the owner planning to keep the restaurant there full-time afterwards.

The admission fee has been raised by $2 to enable the board to bring in the entertainment lineup. Daily admission will be $10 instead of $8. But those not wanting to take in the amusement rides can buy a weekly pass for $35.

“I am glad they are doing it,” Lawrence County Commissioner Freddie Hayes Jr. said. “It means a lot to me. He always supported the fair and liked seeing things get done there. The other two, they did a lot for the fair. Frank spent a lot of years as the groundskeeper. And Bob was a big part of it.”

Honoring their contributions was the reason behind the fair board’s selection of the three men, Clark said.

“We wanted to make sure they knew how much we appreciated all their help,” she said. “They will be missed.”

The 24th annual Ohio River Sweep brought out 76 volunteers locally to clean the riverbanks in Lawrence County. “I am... read more