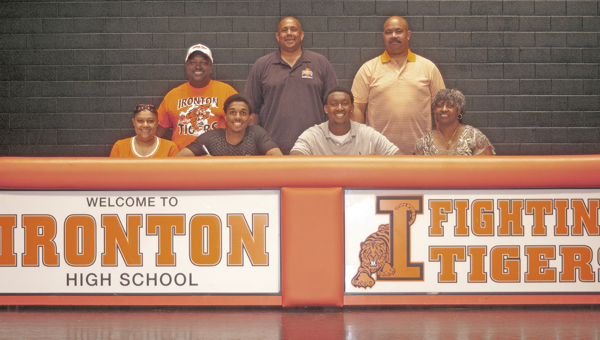 The two-headed monster that terrorized high school coaches the past four years plans to do the same at the college level for another four-year stint.

The dynamic duo helped lead Ironton to a 77-21 record over the past four seasons that included three district titles, one regional championship and a berth in the Final Four.

Both players were excited to make the jump to the next level together.

“It’s going to be great knowing that you have someone you trust on the court — on and off the court,” said Fletcher. “You can play with him four more years and add a new chapter in your life.

Carter said playing in the same program will make the transition easier for him.

The 6-foot-6 Fletcher was an AP first team All-Southeast District selection and third team All-Ohio. He was first team on the coaches’ District 13 team.

Carter and Fletcher were both chosen to play in the annual Ohio/Kentucky All-Star Game.

“If they do their work that’s being asked of them from that coaching staff, I think that they’ll find themselves playing time within the first two years if not sooner. That’s exactly their fit they needed at both positions — one (guard) and whatever combination they use Trey at,” said LaFon.

“Trey can move at 3-4-5 at Walsh. He can play all three. At that level they want (Trey’s) size and that versatility. As fast as they found out (Carter) wasn’t going someplace else, they called and said they didn’t even need to see him (workout on campus).”

Walsh has been a power at the NAIA level, winning the 2005 national championship. This year the program jumps up to the NCAA Division II level and joins the Great Lakes Intercollegiate Athletic Conference.

Cavaliers’ coach Jeff Young has a 242-52 record the past 10 seasons for a program where current West Virginia head coach Bob Huggins got his start.

Both players talked with numerous schools before finally settling on Walsh. Fletcher said it was a tough process but he’s excited about his final decision.

“Walsh just stood out to me for some reason. Me and Zac went to all these school visits and that was the school for me and then I’m just glad he came along with us.”

Carter flirted with offers some Division I schools such as Morehead State and Canisus, but ultimately he decided on Canton-based school.

“It was going to happen. It was my decision. I just wanted to wait until the right time. Me and Trey talked about the whole process and Walsh. I like their style of play. I think it’s going to fit for myself and Trey,” said Carter.

“It was one of the toughest things I’ve done. You think you’ve got one school and then you go and visit and the school you think you wanted wasn’t what you really thought and then you go look at another school and your head starts getting clogged up with all these thoughts and it gets pretty aggravating. But at the end of the day it’s my decision and I’m happy with my decision.”

With their decision made and their college education paid, next on the agenda is earning their playing time.

“My role is I’ve got to work to earn my role first. Then, however I can help the team, that’s how I’ve got to do my job,” said Fletcher.

Ironically, both players plan to major in physical therapy.

LaFon expects both players to be successful both on and off the court.

“The greatest thing about both of them was they were willing to put the time in form a coaching standpoint. It wasn’t like you had to pull teeth to get them to work. They weren’t problems. They grew into a couple of fine young men,” said LaFon.

Trey is the son of Joe and Monica Fletcher.

Zac is the son of Randall and Aleesha Carter.