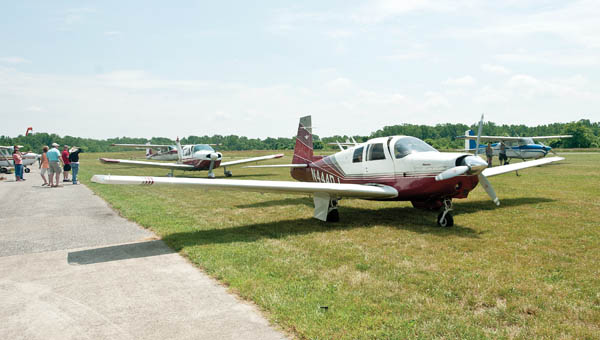 Planes unload passengers during a community fly-in recently at the Lawrence County Airpark.

CHESAPEAKE — The Lawrence County Commission is moving forward with plans to see if the county’s airport in Chesapeake can be turned into a commercial development. That action comes despite a letter from the Federal Aviation Administration that states it cannot consider releasing the county from running an airport for economic development since the county has used federal funds for improvements at the site.

“We are pursuing the idea of marketing it for sale,” Commission President Bill Pratt said.

Since 2001 the county has received $881,281 in federal funds for improvements or a small acquisition of land. Most of that money has been spent on master plan updates, runway safety studies, pavement rejuvenation, surveys for land acquisition for runway upgrades and acquisition of land for an access road to a small cemetery on the property.

“In my opinion you can file for a release from federal obligation,” Pratt said. “If they say no that means, in my opinion, we pay the $881,000. I think if the entire airport was bought with FAA money (not being able to) would be true. But it wasn’t. That is where we need a clarification since that property was deeded to the county. I am not sure the FAA would have authority on the property.”

In April Pratt sent a letter to the FAA asking if there were any ramifications to developing the airport land into a commercial venture that would bring much needed revenue into the county. The commissioner was concerned that the county could be under some obligation since it had received federal funds for upgrading the acreage.

On May 31 Pratt received a reply to his letter from Marlon Pena, program manager for the Detroit district office of the FAA.

“In accepting Airport Improvement Program funds, the airport sponsor (i.e. the county) has agreed to specific terms and conditions as described in the grant assurances,” the letter states. “… thus the sponsor has obligated itself in binding grant agreements to comply with these assurances.”

The majority of acreage at the airport was deeded to the county in the 1930s by the Wilson and Ritter families with the contingency that the land be used exclusively as an airport. If the county wanted to cease running the airport, the property would revert back to the heirs of the two families, according to the deed.

Most of the airport land belongs to the Wilson heirs with Richard Wilson a longtime vocal supporter to selling the property commercially. Pratt wants to come up with an arrangement that would allow the county and Wilson to benefit from the sale of the land to a commercial developer. Pratt envisions an upscale shopping complex that would increase property and sales tax revenue to the county.

However Pena’s letter states that “any proceeds from a sale are expected to stay with the airport or another airport. They cannot go back to the county.”

The grant stipulations state that releasing the county from operating an airport can only be justified if that act benefits the airport.

“The non-aviation interest of the sponsor or the local community — such as making land available for economic development — does not constitute an airport benefit that can be considered in justifying a release and disposal,” the grant states.

On Friday the commissioners will meet with the Wilson family and their attorneys to determine if an agreement can be reached that would allow development to occur.

County property owners who paid the entire year of taxes when the first half was due will still get a... read more