Actress, writer wants to make movie of her father’s story 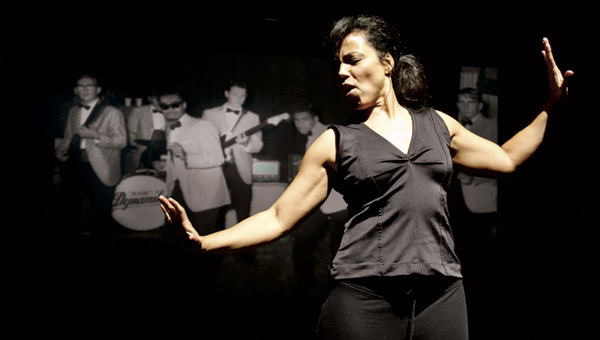 Mitzi Sinnott rehearses her one women play “Snapshot” at the Francis Booth Experimental Theater on the Marshall University campus.

Mitzi Sinnott turned her search for her father into a one-woman drama, “Snapshot,” that has garnered international accolades.

Now she wants to turn the multi-layered stage production into a movie and will perform a special show on Friday that will be filmed to pitch to Hollywood.

“Theater is not enough,” Sinnott said.

In April she premiered the show at the Greenway Theater in Los Angeles.

“The reviews were incredible,” she said. “It re-inspired me. I watched the audience interviews and a few people were crying. They were moved by my family’s story, from here, Appalachia. I was reminded again the story is profoundly affecting people and I want to make it into a film.”

The performance will be at the Francis Booth Experimental Theater on Marshall University’s campus.

“A director in Los Angeles asked for it,” she said. “They want to do what they can to help push it. It is the next logical progression.”

Sinnott is the daughter of Yvonne Sinnott, founder and creative director of Yvonne DeKay School of Dance in Ironton, and the late Lorenzo Batts Jr., vocalist for the Explosive Dynamiks, a Tri-State pop music band in the 1960s.

“He was really looked up to as an artist,” Sinnott said.

However, that was not the man Sinnott knew. Batts was drafted into the Army and spent several tours of duty in Vietnam just before Sinnott was born.

For awhile after the war, the three lived as a family in Hawaii. However mental illness began to grab hold of Batts. The family split with Sinnott and her mother returning to the Ironton area.

Hospitalizations at VA medical centers for Batts were followed by a self-imposed exile in Hawaii.

“The mental illness got progressively worse and progressed into schizophrenia,” Sinnott said.

It is that journey from a biracial child to a young woman who finally meets her father after decades of separation that is the focus of “Snapshot,” where Sinnott plays 15 different characters.

“I may be prejudiced but it is incredible and the story should be told,” she said.

The Friday production starts at 7 p.m. and tickets, which are free, can be found at Sinnott’s website at www.mitzisinnott.com.