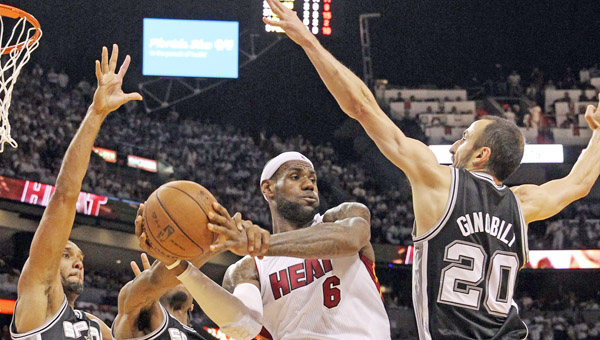 The Miami Heat’s LeBron James (6) passes the ball while surrounded by San Antonio Spurs defenders in the third quarter of Game 7 of the NBA Finals in Miami, Florida, on Thursday. The Heat won 95-88 to claim their second straight NBA title. (MCT Direct Photo)

MIAMI (AP) — LeBron James and the Miami Heat remain atop the NBA, and not even a proud push from the San Antonio Spurs could knock them down.

James led the Heat to their second straight title, scoring 37 points and grabbing 12 rebounds in a 95-88 victory Thursday night in a tense Game 7 that lived up to its billing.

Winning the title they needed to validate the best season in franchise history — and perhaps the three-superstar system they used to build it — the Heat won the second straight thriller in the NBA’s first championship series to go the distance since 2010.

“It took everything we had as a team,” Dwyane Wade said. “Credit to the San Antonio Spurs, they’re an unbelievable team, an unbelievable franchise. This is the hardest series we ever had to play. But we’re a resilient team and we did whatever it took.”

Two nights after his Game 6 save when the Heat were almost eliminated, James continued his unparalleled run through the basketball world, with two titles and an Olympic gold medal in the last 12 months.

“I work on my game a lot, throughout the offseason,” said James, who was MVP for the second straight finals. “I put a lot of work into it and to be able to come out here and (have) the results happen out on the floor is the ultimate. The ultimate. I’m at a loss for words.”

He made five 3-pointers, defended Tony Parker when he had to, and did everything else that could ever be expected from the best player in the game.

The Heat became the NBA’s first repeat champions since the Lakers in 2009-10, and the first team to beat the Spurs in the NBA Finals.

Players and coaches hugged each other after the game, the respect between the franchises that was obvious when the series started becoming even more apparent after two straight classics.

Fans stood, clapped and danced across the final minutes, when every score was answered by another score, each stop followed by a better stop. The Heat pushed their lead to six points a few times midway through the fourth but the Spurs would never be deterred.

The Spurs, so close to a fifth title just two nights earlier, couldn’t find a way to grab it in this one, perhaps the last shot Tim Duncan, Parker and Manu Ginobili will ever get together.

They were trying to become the first road team to win a Game 7 on the road since Washington beat Seattle in 1978, but those old guys ran out of gas just before the finish.

Duncan had 24 points and 12 rebounds for the Spurs, but missed a shot and follow attempt right under the basket with about 50 seconds left and the Spurs trailing by two.

James followed with a jumper — the shot the Spurs were daring him to take earlier in the series — to make it 92-88, sending San Antonio to a team a timeout as Glenn Frey’s “The Heat is on” blared over the arena’s sound system.

He then came up with a steal and made two free throws for a six-point lead, and after Ginobili missed, James stalked toward the sideline, knowing it was over and he was the last one standing again.

Wade had 23 points and 10 rebounds for the Heat, who overcame a scoreless Chris Bosh by getting six 3-pointers and 18 points from Shane Battier.

Streamers fell from the arena ceiling onto the white-clad fans for the second year in a row, but this one meant so much more after how close the Heat were to losing it.

They were down 10 in the fourth quarter of Game 6 before James led the charge back, finishing with a triple-double in Miami’s 103-100 overtime victory. This one was nearly as tight, neither team leading by more than seven and the game tied 11 times.

Kawhi Leonard had 19 points and 16 rebounds for the Spurs, who had been 4 for 4 in the championship round. Ginobili had 18 points but Parker managed just 10 points on 3-of-12 shooting.

The Heat collected the Larry O’Brien again from Commissioner David Stern, presiding over his final NBA Finals before retiring next February.

He couldn’t have asked for a better way to go out.

James avenged his first finals loss, when his Cleveland Cavaliers were swept by the Spurs on 2007. That helped send James on his way to South Florida, realizing it would take more help to win titles that could never come alone.

He said he would appreciate this one more because of how tough it was. The Heat overpowered Oklahoma City in five games last year, a team of 20-something kids who weren’t ready to be champions yet.

This came against a respected group of Spurs whose trio has combined for more than 100 playoff victories together.

Duncan is 37 and Ginobili will be a 36-year-old free agent next month, the core of a franchise whose best days may be behind them.

Meanwhile, it’s a potential dynasty along Biscayne Bay, but also one with a potentially small window. Wade’s latest knee problems are a reminder that though he came into the NBA at the same time as James and Bosh, he’s a couple of years older at 31 with wheels that sometimes seem older.

James can become a free agent again next summer with another decision — though hopefully not another Decision — to make. He’s comfortable in Miami and close with Wade, and the Heat have the leadership and commitment from owner Micky Arison and president Pat Riley to continue constructing a championship core around him.

Why would he want to leave here?

San Antonio’s most recent title came at James’ expense, a sweep of the Cleveland Cavaliers in 2007. The Spurs’ exploited the weaknesses in James’ game though knew someday they would be gone, Duncan telling him afterward that the league would someday belong to James.

And James simply isn’t giving it back.

He came in averaging 33.8 points in Game 7s, already the best in NBA history, and was even better in this one.

Alvarez too much for Reds in loss

CINCINNATI (AP) — Homer Bailey had everything working right the last time he faced the Pirates, putting him on track... read more