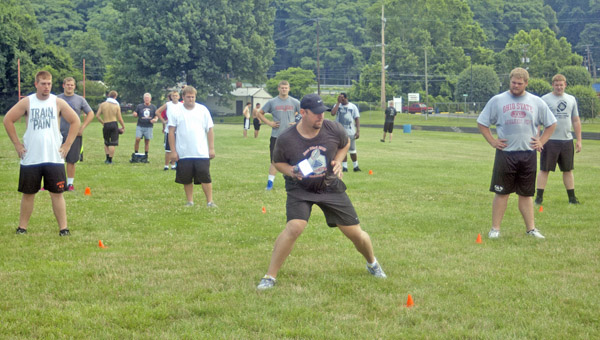 Fry — the former Clemson All-American — was not only the guest speaker for the third annual Preferred Fitness High School Football Combine on Saturday at Ironton High School, but he also helped as an instructor.

“This is the best combine I’ve ever been to,” said Jackson who was a two-time All-Ohio running back at Ironton before his career with the Buckeyes. “I’ve been to plenty of them including Michigan and this is the best. I’m coming back every year.”

Players were given dri-fit T-shirts before being tested at the combine. Next came the mini-camp followed by a free lunch and guest speaker Fry.

“I chose Clemson. I wanted to see a different part of the country. I just wanted to see outside this area. Football has taken me to a lot of places. I want to go see what it’s like in the south,” said Fry who had offers from numerous schools including Ohio State and West Virginia.

Fry played more than 300 snaps as a red-shirt freshman before becoming a starter his sophomore year. He played all three interior line positions and earned All-Atlantic Coast Conference honors as a junior.

He was a preseason All-American pick and was named to the Outland Trophy watch list as a candidate for the nation’s best lineman.

But a knee injury midway through his senior year ended his playing career and hopes of being drafted by an NFL team. Scouting projections had Fry going in the second round of the draft.

“It’s not about me today. I was able to have a decent career. I want you to know what I’ve got to give you and how you can use it,” said Fry.

A three-year starter and second team All-Ohio defensive line selection at Ironton, Fry said he has heard numerous guest speakers and very few left an impression on him. He wanted to change that for the players at the combine.

“Everybody gets up there talks about passion, desire and determination, gives a lot of good buzz words, everybody claps at the end and then the guy walks off and then you don’t remember what he said a week later,” he said.

Fry emphasized work ethic, desire and discipline. He said the key was setting a goal and writing it down.

“Some guy talked to me one day and said you’ve got to set some goals or you’re going to wonder around aimlessly in life and you’re never going to get anywhere,” said Fry.

“It’s like someone is waiting to win the lottery. They’re hoping someone will walk up to you and hand you some money one day. It doesn’t work like that. You have to set a goal. I decided I wanted to play college football.”

Fry said setting the goal was easy, but getting there was the key.

“How can you get there? How am I going to do this?” said Fry who was an Ironton sophomore at the time.

“Bob Lutz, the coach who coached me, said ‘you either getter better or you get worse. You never stay the same.’ So if you set a goal, if it is to play college football and you truly want it, that’s what motivates you, you’ve got to have a plan, and that plan for me was you had to get better.”

Fry said he began training with teammate Reggie Arden “who was better than me.” The training with Arden — who went on to play at Ohio State — made Fry better and earned him a football scholarship.

One day Fry went into a store and saw the college football preview magazines and decided he wanted to be in those types of magazines some day.

Fry said players must have a good work ethic, desire and discipline.

“Be the guy that people hate to practice against. You’ve got to stand out every play. You can’t take a play off. You have to have a motor that never stops. Line up every time and don’t stop. Play every play like it’s your last play,” said Fry.

Off the field, Fry said players must have discipline in the classroom. He reflected on a teammate who was good enough to play at the college level but did not have the grades to qualify.

“You have to put the extra time in the classroom,” said Fry.

“Never let one bad play affect the next play. No one is perfect. It’s okay to make a mistake. You have to move on. I had a knee injury and a tragedy in my life. The world can be cruel. If you let it affect you, then you let it win,” said Fry.

Joe Bowling was the overall combine champion and was also the top junior. Austen “Red” Pleasants was second in the junior class.

Jim Walker jim.walker@irontontribune.com   COLUMBUS — John Gagai is like fine wine. He seems to get better with age. As... read more