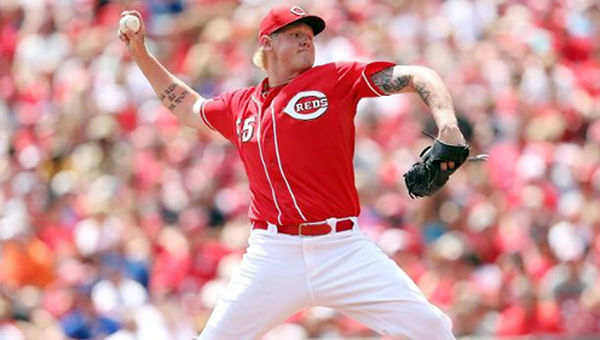 Cincinnati Reds’ Mat Latos is one of many players who understand the risks that are involved with being a Major League Baseball pitcher. (Photo Courtesy of The Cincinnati Reds.com)

Cleveland Indians reliever Vinnie Pestano has a recurring dream. A batter hits a line drive right back up the middle and it’s screaming toward his head.

He wakes up just before impact.

The real thing is a nightmare scenario that happens a couple times a season in the major leagues.

Most recently, it happened two weeks ago in Florida.

Happ won’t return until July — at the soonest. There’s no timetable for Cobb yet, though he’s home from the hospital.

In the meantime, baseball is left to figure out how to protect pitchers before one gets hurt in a more serious way.

It’s not just a player’s health and livelihood at stake. Teams also lose money when their players are on the disabled list. While Major League Baseball has been auditioning various types of equipment to protect pitchers, nothing has made the cut yet.

Any gear would have to stay in place during the violent, whole-body motion of pitching, not hinder its effectiveness and, of course, effectively protect their heads in event of an impact.

“I really hope something gets done because it’s time to act,” Royals pitcher Bruce Chen said. “I know it will probably take a couple of years to get it done, but let’s do it. Too many guys are getting hurt.”

Every pitcher knows that any pitch could result in a ball flying 100 mph or more right back at his head. Not all of them agree that something must be done.

“No one’s forcing you to play this game, and we’re not children,” Cubs pitcher Jeff Samardzija said. “We’re playing big league baseball with grown men, so that’s the risk you take when you play this game.”

Samardzija played major college football as a wide receiver at Notre Dame before he went into professional baseball, so he knows about danger in sports, and is familiar with wearing a lot more protective equipment than he does on the mound.

He is adamantly against requiring pitchers to wear anything more than they do now.

“Absolutely not. No. This game’s been played the way it’s been played for a long time,” he said. “And when you sign up to play this game, no one’s forcing you to play. No one’s pulling you out there to do it. You’re choosing to do it. It’s what we love to do and obviously when you choose to play you take the risks that come with doing it.”

Each major league game has at least a couple hundred pitches thrown. And there are more than 2,500 games a season. Out of all those games and all those pitches, no more than a few have a pitcher getting hit in the head.

The rarity of those occurrences is such that most pitchers put it completely out of mind — out of necessity, if nothing else.

“If you think about it while you’re out there, you’re not going to get your job done,” said Chris Jakubauskas, who was hit by a line drive early in the 2010 season.

He sustained a concussion but recovered fully and is now in the Cleveland minor league organization, trying to return to the big leagues. He has more immediate problems than something that statistically improbable.

“When you take into account how many balls are put in play every single year,” Jakubauskas said. “The risk is there, if you’re in the wrong place at the wrong time, you just hope you’re in a place where you can protect yourself a little bit.”

Of the more than a dozen pitchers and managers The Associated Press interviewed for this story, the one thing they all emphasized was just how much bad luck it takes to be hit in the head.

Sure, when a player gets hit, everyone notices, but the vast majority of balls put into play come nowhere near hurting anyone. And even the close calls emphasize how unlikely it is for a pitcher’s head and a batted ball to wind up in the same place in such a way that the pitcher is unable to turn or get his glove up.

“That ball’s not big, so for that ball to hit me right there, the percentage of chance of that happening to me is not worth doing all the headgear,” Giants pitcher Jeremy Affeldt said. “Unless you have to, I’m for that. That’s just your livelihood, I’m not going to die. I’m not going to do it.”

“Let’s see. You have five starters. No, wait, you have, what, 12 pitchers on a team? Do the math,” he said, pulling out his phone to use the calculator function.

“It is what it is,” he said. “You know comebackers can happen.”

And they will continue to do so. The question is what can be done to prevent these rare but dangerous incidents.

Helmets? Protective cap liners? A protective screen, like in batting practice? All of these have been suggested. None have been acclaimed in baseball. Neither by rookies or veterans.

“I’m not going to overreact to that because I’m not real sure a guy can pitch with a helmet to be honest with you,” Tigers manager Jim Leyland said. “I can’t imagine a pitcher out there pitching with an ear flap on. … I hate to sound cold about it because I don’t mean to, but I’m not sure that’ll work.”

Ideally, baseball won’t have to find out.

“Hopefully it doesn’t get to the point where there is a mandate to wear something,” Pestano said. “Because that would mean something tragic has happened.”

AP Sports Writers Tom Withers in Cleveland, Larry Lage in Detroit and Janie McCauley in San Francisco, and AP freelancers Brian Dulik in Cleveland and Mark Schmetzer in Cincinnati contributed to this report.