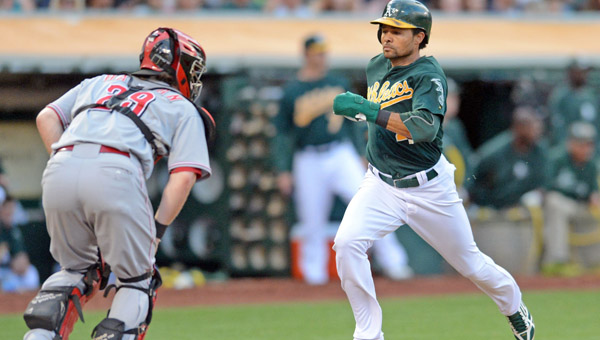 Cincinnati catcher Ryan Hanigan (29) watches as Oakland Athletics’ Coco Crisp (4) scores on a single hit by Yoenis Cespedes in the second inning of Tuesday’s game against the Cincinnati Reds in Oakland, Calif.. The A’s beat the Reds 7-3. (MCT Direct Photo)

OAKLAND, Calif. (AP) — Bronson Arroyo had a pretty good thing going against the Oakland Athletics, at least before he was caught off guard and roughed up Tuesday night.

The A’s jumped on Arroyo early, ending his day after a season-low four innings in the Cincinnati Reds’ 7-3 loss to start this quick, two-game interleague matchup.

It was the shortest start for Arroyo (6-6) since three innings last July 16 against Arizona at home. And the right-hander surrendered seven runs for the first time since allowing eight against the Indians on July 1, 2011, in Cincinnati. He gave up seven hits.

“They just had a great approach against me, to be honest with you. I predicate my game on being able to play mental chess-matches with guys and beating them to the move first, and they beat me to the punch,” he said. “They had a nice approach. They did some things I didn’t expect them to do. I wasn’t that familiar with the lineup. Feeling like I was a bit pigeon-holed by not having a sharp enough breaking ball to beat anybody, including the righties, made it very difficult.”

Josh Donaldson hit a two-run homer, newly promoted Stephen Vogt hit a sacrifice fly for his first major league RBI as the A’s bounced back from a tough road trip.

The Reds were greeted by fresh carpeting and other upgrades nine days after a sewage problem and flooding in the clubhouses and umpire room that sent the A’s and Mariners scrambling for the locker room of the NFL’s Oakland Raiders.

Joey Votto hit his 14th homer, and Cincinnati’s Derrick Robinson had a career-high four hits. Robinson has hit safely in six of his last seven games, going 9 for 26 (.341) during that stretch.

“I got some to fall in, got one to ricochet off the pitcher and I got a base hit bunt that I beat out,” Robinson said. “We had a couple times where we had bases loaded. But it didn’t work out in our favor completely those times. You’ve just got to keep going.”

Votto homered leading off the fourth but the Reds missed too many other chances to back Arroyo. Cincinnati left 11 men on base and lost for the fourth time in six games.

“Tough game today,” manager Dusty Baker said. “We out-hit them and we left a lot of men on base.”

Baker, the former Giants manager who departed after his club fell just short in the 2002 World Series to the wild-card Angels, got back to his Sacramento-area home Monday and brought freshly picked fruit to the clubhouse. He planned to sleep at his other home in San Bruno on Tuesday night.

He will be ready for a fresh start Wednesday afternoon.

The Reds hit three straight deep flyballs to center in the first — each of which might have cleared the fences in Great American Ball Park.

While Melvin called it “difficult” removing Milone when he was so close to the five innings he needed for a win, the pitcher knew he was laboring.

“You could see it,” Milone said. “I walked three guys in a row and walked a guy in. I don’t blame him for taking me out right there. It makes it easier when you’ve got the bullpen we do.”

The Reds left the bases loaded in the fifth and again an inning later when Votto flied out to end the sixth, then wasted chances again in the eighth.

Arroyo lost for only the second time in five June starts, having his two-start winning streak end.

He had beaten the A’s in his last three decisions over five starts since losing his first career appearance against Oakland 15-2 on May 27, 2004. Arroyo also had gone at least six innings with two or fewer earned runs in four straight starts — but missed doing so in five in a row for the first time since Aug. 24 to Sept. 14, 2009.

“I wasn’t surprised they swung early. I was surprised at some of the pitches they swung early on,” Arroyo said. “They flipped the tables on me. I usually pitch off the beaten path and they came at me with an approach that was a bit awkward.”

The Reds placed second baseman Brandon Phillips on the paternity list, and he will miss the team’s two-game series in Oakland before rejoining the club Friday at Texas.

Notes: Cincinnati hosts the A’s for two games Aug. 6-7. … The Reds reinstated OF Heisey from the 15-day disabled list after a six-game rehab assignment with Triple-A Louisville. He had been on the DL since April 29 with an injured right hamstring. … Cincinnati also recalled INF Henry Rodriguez from Louisville for his second stint with Cincinnati this season, and optioned outfielder Donald Lutz to Double-A Pensacola. … The Oakland Coliseum has had different ballpark names in each of Cincinnati’s last four trips to face the A’s. … Ryan Hanigan is in an 0-for-12 slump.