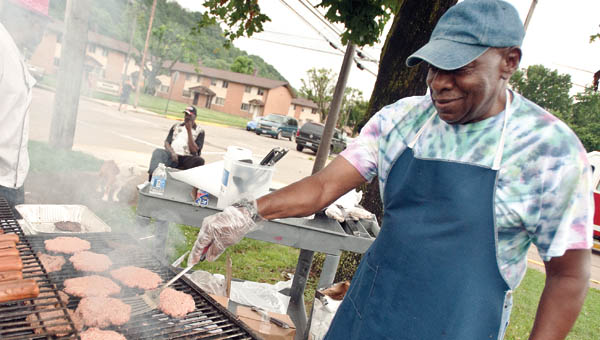 As they placed the colored chips on their Bingo cards, Tilea Spencer, 7, and Jaelyn Roberts, 6, reflected on the past few weeks.

“We did a lot of fun things here,” Tilea said of her time at the Youth Empowerment Activities summer camp.

Both girls said, almost in unison, their favorite activity during the month-long camp was swimming.

“Going to the pool and spending time with everybody,” Tilea and Jaelyn said.

Jaelyn also said she made a lot of friends during the camp.

Thursday was the culmination of the camp with a Community Health Fair and cookout for the children and their families, as well as the surrounding Ninth Street community.

Mollie Stevens, prevention and development manager for the Family Guidance Center, has helped coordinate the YEA camp since it began in 2006 and said more and more children join each year. The camp is also sponsored by the Appalachian Family and Children First Council, Our Lady Bellefonte Hospital and the Ironton Metropolitan Housing Authority.

“It gives the children the opportunity to try different activities, especially the younger ones,” Stevens said. She also said the camp puts the children in contact with positive adult role models in the community.

In addition to swimming at Sta-Tan Pool, the children visited the Ohio Horse Park and Spare Time Recreation, tended to their plots at the community garden, made crafts and played sports and games.

The cookout Thursday rounded out the month with more games, inflatables, a look inside an Ironton fire truck and a health fair for the adults.

Outside, the Rev. Richard Carter and Haywood Ferguson Jr. volunteered to man the grill of hamburgers and hotdogs.

Carter said the men volunteer each year for the love of the community and the children.

“We need to get the children away from the computer and the iPods and show them there are other activities out there,” Carter said.

Lawrence County Engineer Doug Cade was coming back to Ironton on U.S. 52 with his son, Jon, when he saw... read more