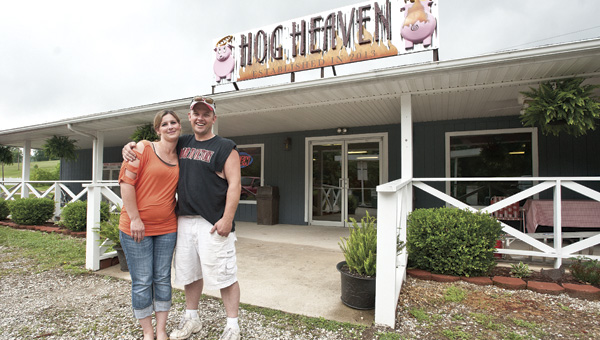 WILLOW WOOD — Josh and Amy Saunders already had a reputation for opening their Greasy Ridge home to hungry friends and family, so when the opportunity to open their own restaurant presented itself, Hog Heaven was born.

It was a business venture the couple said they always wanted to undertake, and in March they began the process to transform the former Maw Mannons restaurant on State Route 378 into a barbeque establishment.

“We have always loved roasting hogs,” Josh Saunders said. “At least once a year.”

Now, the yearly tradition has turned into a daily one.

By the time Hog Heaven opened Monday, Josh had already been hard at work, pork butts in the smoker, followed by ribs a few hours later. Amy was in the kitchen, hand cutting vegetables, making baked beans with her mother’s recipe, macaroni and cheese and other side items.

Even grandma Helen Saunders lent her baking skills and prepared some of her famous apple pies this week.

If the name Hog Heaven doesn’t do enough to explain the restaurant’s fare, the sign on the roof, haloed pigs standing over a flame, should.

Word of the new restaurant has begun to travel via Facebook and word of mouth, and Amy said the first few days in business were pretty steady.

Both ordered pulled pork sandwiches — so good they had to order twice, they said.

“It was amazing,” McFarland said with a heavy sigh.

“It was moist,” Lambert said of the pork. “It had a really good, smoky taste. We need more places like this around.”

The Saunderses said they hope the restaurant will do well, but that owning their own business is not all about turning a profit.

“We’ve got 51 acres, four kids, three dogs, two pigs and a house,” Josh said. “I want to have the opportunity and freedom to be more involved with her (Amy) and the kids, instead of letting a job run my life.”

“We’ve wanted to do it a long time,” Amy agreed.

The Ironton Post of the Ohio State Highway Patrol, with assistance from the Ashland Police Department, has identified the driver... read more