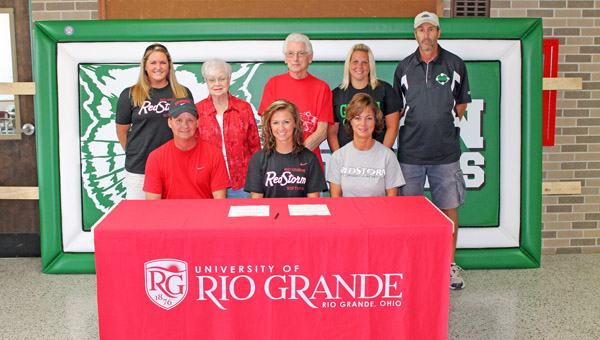 Crawford played whatever position her coaches asked of her, and then she took their instruction regarding a college program.

The Green Lady Bobcats’ senior softball standout took the advice of her coaches and signed a letter-of-intent to play for the University of Rio Grande Red Storm.

As usual, she listened to their advice.

“So they really influenced my decision. And I liked how close it was to home and they showed me it was a small place and you really fit in.”

At Green, Crawford played shortstop, pitched and even played some outfield. She batted .519 her senior year and was named first team All-Southern Ohio Conference for the third straight season. She was a two-time Coaches District 14 all-star team member and was named to the All-Ohio Underclassmen team as a sophomore and junior.

However, Crawford will probably shift to second base for Rio Grande and, as usual, she will be glad to do whatever her college coach Kristen Bradshaw asks of her.

“I love second. I had to pitch and I had to play short for high school. I didn’t have a choice. I liked it there, but I really like second base,” said Crawford.

Crawford plays on the K.C. Diamond travel team and three of her teammates are also headed for Rio Grande. Crawford is impressed with the RedStorm program.

“They are really building back up their softball program and I think that the way I’ve been improving that I’ll be able to fit right in with them,” said Crawford who is looking forward to playing at the college level.

“I love the challenge of being at the next level because I’ve always wanted to go further. Once I got on my travel team that was another step further from high school and then college will be another step further from travel. And I like being with the other girls who I have a lot in common with. Softball is my main thing that I do and I like to have friends who do the same thing.”

Having a love of the game and talent aren’t the only factors that will determine playing time and Crawford is fully aware of that aspect of college softball.

“Work…really…hard,” said Crawford slowly and emphasizing the importance of hard work. “I’m probably going to have to do a lot of extra workouts and get ahead of everyone else to show that I want to be in that position.”

“They all play so well together. We’re bringing in four or five from her summer team. I know she’s going to fit in,” said Bradshaw.

Crawford — who is deciding between education and nursing as a major — put up some impressive numbers off the field.

She was the student body president, a member of the National Honor Society and the class Salutatorian.

Jenna is the daughter of Rocky and Kathy Crawford of Franklin Furnace.

You’ve seen the new public service advertisements trying to combat bullies. In the case of the Cincinnati Reds, they’ve been... read more