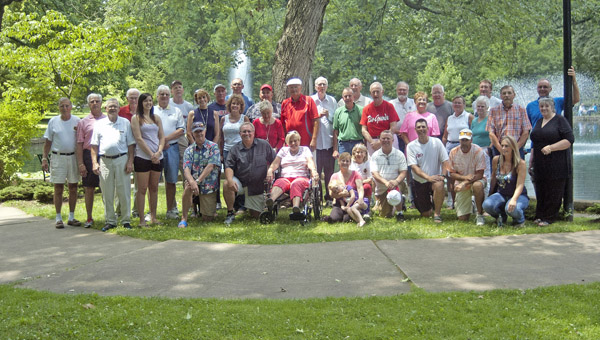 Former University of Rio Grande graduates and their spouses gathered for a reunion at Ashland’s Central Park on Sunday, June 23. (The Ironton Tribune / Jimmy Walker)

ASHLAND, Ky. — The award-winning television sitcom “Friends” lasted 10 years. The real-life show of “Friends” known as the University of Rio Grande Class of 1965 is still running.

The group of athletes who played sports at Rio Grande and graduated in 1965 have remained close, along with other former athletes who were in classes a year or two behind them.

Legendary Art Lanham, 81, coached basketball and was the athletic director from 1960-80 at Rio Grande. He was honored at the reunion and talked about the special ties between the group.

“I call them the ’65 Boys. The special thing about the ’65 Boys is that during the time they spent at Rio Grande they established a friendship unlike any other. I call it love,” said Lanham.

“There are all different kinds of love. They have a special love for each other.”

The group of graduates presented Lanham with a few gifts and expressed great appreciation for the impact on their lives.

“He’s a great man. He was a father figure and a coach to all of us,” said Mike Burcham, another member of the 1965 class who played baseball and is a member of the school’s athletic Hall of Fame.

“I coached for 47 years and I did a lot of things he did. He knew how to treat his players and he made them want to play for him. I loved him dearly and so did everyone here.”

Steve Gilmore — a former basketball player who went on to become the head coach and athletic director at Ashland — said Rio Grande left a lasting bond among the players from the first day they set foot on the campus.

“We got together the first night and we became instant friends. I don’t ever remember an argument or any hard feelings. The chemistry and camaraderie I learned and to not be a quitter I’ve carried with me all my life,” said Gilmore who is also the former mayor of Ashland.

“Coach Lanham was a big part of that. He knew how to handle us. It was the greatest small college anyone can ever go to. It still is.”

Although the reunion began as a gathering for the 1965 class, it has expanded to include any Rio Grande graduates.

“This started out as a reunion for our class and it’s just kept growing,” said Burcham. “You look around here and you can see that for a little place, Rio Grande has turned out a lot of good coaches and guys who have won state championships.”

Burcham himself was a coach for 47 years at Ironton where he won the 1972 Class AA state baseball championship and was an assistant coach for the 1979 and 1989 Ironton football state championships.

One of the more prolific members of the 1965 class on hand was Bob Leith, former history professor at Ohio University Southern who spent 30 years as a student, teacher and coach at Rio Grande.

Smalley made a presentation to Leith — a.k.a Mr. Rio Grande — for his continued service at the school despite the fact he taught at Ohio University.

“The love this man has for Rio Grande is unbelievable,” said Smalley. “He will always help people. He will carry the torch. He’s still up to his neck in helping Rio Grande University.”

A 1978 graduate of Rio Grande, Smalley remembers Leith as a teacher and showing him the right way to become a coach.

“He would pay for meals out of his own pocket. He would sweep the floor and cut the grass. He would do laundry so we’d have clean uniforms for the next practice,” said Smalley.

“He had the ability to mold and not make you feel embarrassed or inferior.”

Rio Grande has quite a cast ensemble with the ’65 Boys as the main stars. It’s obvious this show has quite a few more years still to air.