She said the first 17 years of her life were normal, then the weird déjà vu started, then full-blown seizures were happening multiple times a day — then Callie came into her life and some of the clouds parted.

The 6-year-old Labrador/Golden Retriever mix has been Emily Horsley Compton’s constant companion for the past five years. She said she cannot image life without her friend.

“Having Callie gives me some form of independence,” Compton said. “Before her I could not be alone, now I don’t have to be around someone all the time because Callie will alert them if I’m having a seizure.” 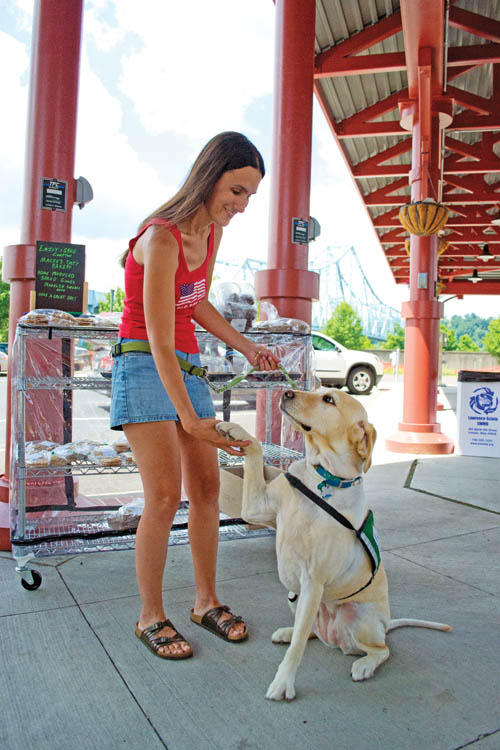 When she first received Callie, Compton said she was having two or three seizures a day. She said she is grateful for a new medication she recently began and has not had a seizure since February. But she said a future seizure is guaranteed, and she knows Callie will be there when it does to help take care of her.

Compton received her seizure response dog from Canine Assistants, a service dog non-profit based out of Milton, Ga. The organization trains dogs for a variety of tasks from seizure response to helping children and adults with physical disabilities or other special needs.

Compton said she was on the waiting list for about a year before going to Georgia to receive Callie. She said she was very impressed with their program and facility.

“It’s a two week camp,” Compton said. “You go down and the dog trains you. They try you out with different dogs to see which one works best for you.”

Compton said in the beginning her favorite was Callie’s sister, but after Callie picked up on one of her seizures from her kennel in a different room, it was obvious the bond had been formed. She said she is forever thankful for that bond.

Greg, Compton’s husband, said it is amazing seeing Callie in action. He said if he is in a room with Callie and she starts acting weird, barking and getting his attention, he knows he needs to find his wife and her medication.

“I can’t describe it,” Greg said. “I can be in the kitchen baking and Callie will start acting weird. When that happens I know Emily is having a seizure and go to her.”

Compton said she, Greg and Callie work together as a team to keep life as normal and independent as possible for her.

And one aspect of normal for the trio is to hang out at the Ironton Farmer’s Market where Greg sells homemade baked goods. Compton said on really hot days they leave Callie at home, but most of the time they are all out enjoying their time together.