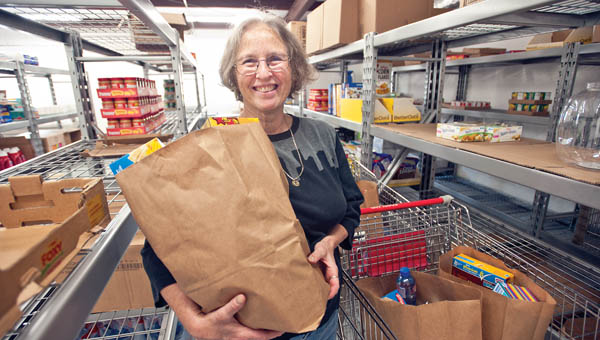 Ironton native Diane Porter has taken over the responsibilities as manager for the Harvest for the Hungry food pantry, located on Fifth Street in downtown Ironton.

Starting in July, it will be easier for people in need of emergency food assistance to get the help they need.

Harvest for the Hungry, the food pantry funded by Ironton’s downtown churches and donations, is moving from a referral-based system to welcoming walk-in applicants who bring their own documentation.

Diane Porter, the pantry’s new director and manager, said the new system would be less cumbersome for those in need of assistance.

“Our pastor (Wayne Young of First United Methodist Church) thinks people shouldn’t have to jump through a lot of hoops to eat,” said Porter, who started in March.

Before, people in need would have to be referred monthly by an agency such as Family Guidance, the Department of Job and Family Services or the Ironton-Lawrence County Community Action Organization. Following the referral, those people would also have to fill out more paperwork at Harvest for the Hungry.

Starting this month, the agency referral is no longer needed, Porter said.

Anyone who needs food assistance can come to the food pantry with their own documentation: Picture identification, social security cards for all household members and proof of income.

“We do their qualifications now,” Porter said.

Each person is allotted one visit per month to the pantry.

Porter also said the pantry is in the process of digitizing its client records to make the process even easier for those visiting the pantry. Recently Porter volunteered with the Logan Food Bank to run a demo of the new computer program.

“It will make it faster,” she said. “All we will have to do is update their record.”

The new computer program will also keep statistics of who is using the pantry each month — new families, children, seniors or frequent visitors.

The numbers are already surprising.

Between March and May, more than 1,600 people were fed from the pantry. Of that, nearly 600 were children.

Porter, treasurer of First UMC, said that statistic was one of the driving reasons she wanted to take on the role as manager at the food pantry.

“They (children) don’t have any say in what’s going on with them,” Porter said.

Another group hit hard by hunger is seniors. Porter said the pantry helps between 35 and 50 seniors each month.

Harvest for the Hungry buys food from the Huntington Area Food Bank and the Logan Food Bank, but also depends on local donations of both food and funds.

Porter said the pantry also accepts donations of produce from backyard farmers. Currently, she said produce is needed. Recently, with the help of volunteers, Porter planted some vegetables in raised beds around the pantry.

To find out more information or to find out how to volunteer, call the pantry at 532-9918.

Pantry hours are 9 a.m. to noon Mondays, Wednesdays and Fridays.

She said the first 17 years of her life were normal, then the weird déjà vu started, then full-blown seizures... read more