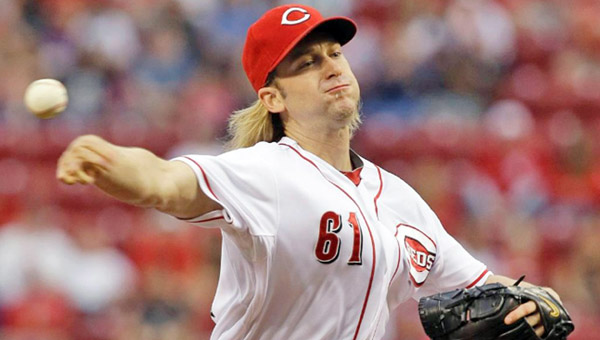 Cincinnati pitcher Bronson Arroyo pitched six innings of two-hit baseball as the Reds beat the San Francisco Giants 8-1 on Monday in a game shortened to six innings due to rain. (Photo Courtesy of the Cincinnati Reds.com)

CINCINNATI (AP) — Things had gotten so bad for Cincinnati’s offense that the Reds couldn’t even remember the last time anything amounted to a rally. Finally, they got a reference point.

Todd Frazier homered and drove in four runs Monday night, leading the Reds out of their offensive slump to an 8-1 victory over the San Francisco Giants in a game shortened to six innings because of rain.

Frazier had an RBI single and a three-run homer off left-hander Mike Kickham (0-3), who has been hit hard in each of his three major league starts.

Derrick Robinson drove in a pair of runs with a single, and Zack Cozart added a sacrifice fly and a run-scoring double as the Reds piled up their most runs since a 12-2 win at Wrigley Field on June 11.

“We haven’t had a big inning in a while,” Frazier said. “We were talking with (manager Dusty Baker) about that the other day. We had a little meeting. We were like, ‘When was the last time we had a big inning?’ To have one was pretty nice.”

Bronson Arroyo (7-6) gave up a pair of hits in six innings, including Brandon Belt’s homer. He got credit for his 14th complete game and his first of the season.

“I’ll take it,” Arroyo said. “It might be the only complete game I get all year. On the back of my baseball card 20 years from now, nobody will know the difference.”

Rain halted the game after the sixth. The umpires waited 1 hour, 28 minutes through a steady downpour before calling it. By then, water was cascading down the dugout steps and flooding the tunnels as well as the field.

“You want to play but with what we’re looking at — it’s coming down harder, it’s flooding in there — at some point we’ve got to draw the line,” Giants manager Bruce Bochy said. “You want to play the game, but it’s pretty bad out there. The field’s in bad shape.”

It was the first game shortened by rain at Great American Ball Park since Cincinnati’s 4-2 win over the Cubs in five innings on Sept. 22, 2006. The Reds had a game suspended overnight because of rain earlier this season.

The Giants returned to the place where they pulled off one of baseball’s biggest playoff comebacks. After falling behind Cincinnati 0-2 in their NL division series last season, they won three straight at Great American to advance and eventually win the World Series.

Bochy got a good feeling as he walked into the ballpark on Monday, remembering those moments. His club hasn’t had many good ones lately, going 10-17 in June, its worst month since July 2008. That included a six-game losing streak that was San Francisco’s longest in three years.

July hasn’t started any better for the defending champions, who have lost nine of their last 11 games. They’ve scored two runs or less in eight of those 11.

The Reds, too, were struggling to score runs and win games. They went 2-6 on a trip out West, getting shut out twice while falling 5 1/2 games out in the NL Central, their biggest deficit in two years.

No such problems this time.

The Reds scored four times in the second inning off Kickham, more runs than they managed in four of their last five games. The 24-year-old pitcher has gotten a rough introduction to the majors, making his first three starts on the road and losing all of them. He’s given up 21 hits and 16 earned runs in 10 1-3 innings.

Jake Dunning had just started warming in the Giants’ bullpen when Frazier hit a three-run homer in the third on Kickham’s 56th pitch. It was the fourth homer Kickham has given up in his three starts.

That was the first time the Reds had scored more than five runs at Great American since an 8-2 win over Cleveland on May 28.

NOTES: Kickham doubled in the second inning for his first major league hit. … Giants RHP Ryan Vogelsong played catch before the game. He broke bones in his hand on a swing May 20 and needed surgery. He’s still several weeks away from returning. … Belt’s homer was his ninth, tying his career high from his rookie season of 2011. … Buster Posey was back behind the plate after playing two games at 1B to rest his tight legs. He left with rain falling in the sixth. … Arroyo was coming off his worst start, a season-high seven runs in a season-low four innings of a 7-3 loss in Oakland.