Sharing in the love 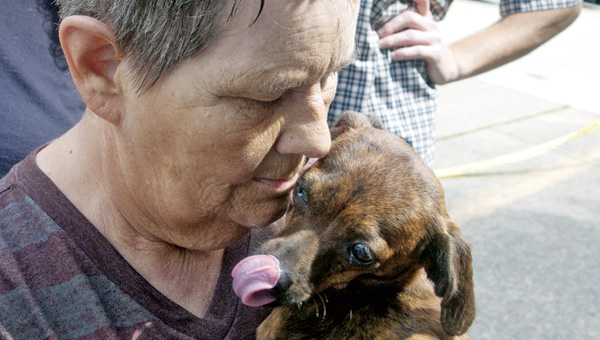 Cyndi Combs of Ironton plays with a mixed-breed dachshund at the pet adoption at the Briggs Lawrence Library on Monday.

The rust and black brindled dachshund mix may not have had a name, but she knew how to win hearts as she snuggled up to Cyndi Combs of Ironton.

“I’m seriously considering it,” Combs said about the prospect of adopting the wiry hound. “This is wonderful for people who don’t get to go to the shelter.”

On Monday the parking lot of the Briggs Lawrence Library in Ironton was filled with cages of kittens and puppies and hounds on leashes all sharing hugs and kisses.

For most of the day, the Friends of the Lawrence County Animal Shelter brought some of the animals they are hoping are only taking up temporary residence at the shelter to the library lot.

At least twice a month the Friends host a pet adoption, usually at Petland and Tractor Supply in South Point. This was the first for the Briggs Library and organizer Lori Shafer would like to see the adoption be a regular event at the Ironton branch.

“We usually get one or two adopted,” Kelli Fuhr of the Friends said about the fairs.

The organization started in September when a Facebook user from Pennsylvania approached Fuhr about starting a Facebook page for pet adoptions in Lawrence County.

“In the last six months we have had no euthanasias (at the pound),” Fuhr said.

Among the animals up for adoptions at the library were an abandoned male beagle abandoned and three cats whose owner had to move into a nursing home and could no longer care for her pets.

“Most people want purebreds,” Combs said. “But see how loving these are.”