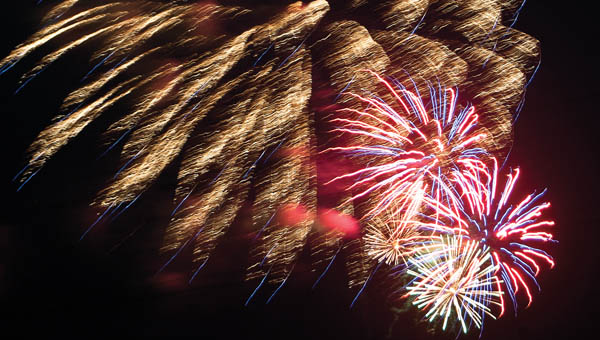 The skies were lit up Wednesday evening as the Coal Grove Betterment Club put on its fireworks finale that signals the end of the three day Family Fun Days event held at Paul Porter Park. Residents lined the streets and filled the parking lots of Coal Grove to view the event.

COAL GROVE — Bob Sells has been an auctioneer for more than 40 years.

If you are a 4-Her selling livestock at the fair next week or, in Wednesday’s case, civic club members selling baked goods, you want Sells’ fast-talking to drive up the bids.

It was Sells’ sassy auctioneering and a good cause that drove the bids high at the Coal Grove Family Fun Days cake and pie auction at Paul Porter Park Wednesday.

The rain slowed to a light sprinkle as local business and political leaders vied for the homemade goodies, which ranged from an old-fashioned raisin pie to a decadent banana split cake.

“I sampled every bit of it, and it’s good,” Sells joked during the bidding, encouraging spectators to be generous.

Coal Grove Betterment Club members and others in the community made the desserts to auction off to raise money for community projects, like the Family Fun Day event, and upkeep of the park and village’s Christmas decorations.

The highest selling item was a patriotic Fourth of July cake, which sold for $200 to a group of county politicians who wanted to end the auction on a high note.

Across the way, another Family Fun Days activity was drawing a crowd.

For $1 per draw, children and adults waited in line to try their luck for a gift basket at the Chinese auction booth.

One of the biggest money makers for the betterment club, 127 gift baskets were donated by local businesses and citizens.

Mayor Larry McDaniel said the auction has brought in as much as $2,500 in past years.

McDaniel praised the betterment club and the village for putting the three-day family-oriented event together each year.

“People get to come out and it’s kind of like a reunion for them,” McDaniel said. “You get to meet new friends and see old friends.”

McDaniel also extended thanks to Judge O. Clark Collins’ community service work program that provided workers to help mow, weed eat and set up the park for the festival.

The festival ended Wednesday with the fireworks display.

Sharing in the love

Cyndi Combs of Ironton plays with a mixed-breed dachshund at the pet adoption at the Briggs Lawrence Library on Monday.... read more