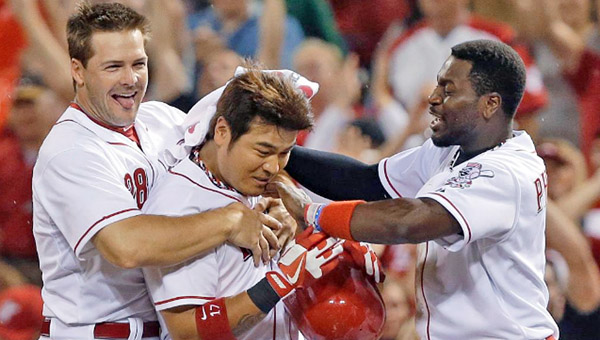 CINCINNATI (AP) — Shin-Soo Choo let his bat and his teammates do the talking for him Wednesday night.

Choo’s two-out single in the 11th inning drove in Todd Frazier from second base, lifting the Cincinnati Reds to a 3-2 win over the San Francisco Giants.

Frazier walked to lead off the 11th against left-hander Javier Lopez (1-1) and went to second on Chris Heisey’s sacrifice. After Devin Mesoraco was intentionally walked, pinch hitter Ryan Hanigan popped out before Choo came up with his second hit of the game, giving the Reds three straight wins for the first time since June 10-12 against the Cubs and thrilling a sellout crowd of 40,757.

The left-handed Choo almost won the game in the ninth, but his sharp one-hopper up the middle with Mesoraco on second was picked off backhanded by second baseman Tony Abreu for a groundout.

“I’ve been saying that he’s one of the best hitters in the game, and I’m sticking with that,” said Frazier, whose bobblehead was one of the game’s attractions. “He makes adjustments. That’s what he did his last two at-bats.”

Choo’s hard-hit ball to Abreu was typical of his recent bad luck, according to manager Dusty Baker. After a hot start, Choo’s average was .269 going into the game.

“The guy he got the hit off of is tough against left-handers,” Baker said. “He’s been hitting the ball well lately with nothing to show for it.”

Choo was working out rafter the game and wasn’t available to speak to the media.

J.J. Hoover (2-5), Cincinnati’s seventh pitcher of the game, struck out four batters in two innings for the win.

“We were down to our last man,” Baker said. “We cleared the bench trying to win that game.”

The spiraling Giants have lost nine of their last 10 games, including eight of nine on the current road trip, and have scored two or fewer runs in 10 of their last 13 games. They fell six games below .500 for the first time since the last day of the 2008 season, which they finished 72-90.

“We had a good effort from our bullpen,” manager Bruce Bochy said. “We couldn’t get a hit with men in scoring position. We have too many guys scuffling. I don’t know why, whether they are pressing or trying too hard. I wish I had the answer. It seems like we’ve been saying this for quite a while. We need someone to give us a spark and get a big hit. When you get in a rut like this, you try too hard. We were playing to win one game to get us out of it.”

In their first game after being held hitless by Homer Bailey on Tuesday, the Giants needed just two batters to remove any doubt. Abreu, San Francisco’s No. 2 hitter against Tony Cingrani, reached second base with a bloop double down the right field line for the Giants’ first hit in 11 innings since Brandon Belt led off the fifth with a home run in an 8-1, six-inning loss to the Reds on Monday.

The Reds took a 1-0 lead in the second, which Giants starter Barry Zito opened by hitting Jay Bruce with a pitch. Bruce went to third on Frazier’s single to center field and scored on Heisey’s sacrifice fly.

The Giants took their first lead of the series in the fifth when Blanco drew a two-out walk and Abreu followed with a 442-foot blast into the upper deck in left field on Cingrani’s 1-1 pitch. The homer was Abreu’s first since last Sept. 16 for Kansas City against the Angels.

Cingrani, making his eighth start of the season and first since Johnny Cueto went on the disabled list June 29 with a strained back muscle, allowed four hits and two runs with four walks and five strikeouts in 5 2-3 innings. His walks were a single-game career high as a starter.

Zito left the game after Choo and Zack Cozart led off the fifth with singles. Zito allowed seven hits and one run with a walk and three strikeouts.

Heisey, on the disabled list from April 29 to June 25 with a strained right hamstring, tied the game with a 422-foot solo homer into the left field seats on a one-strike pitch from George Kontos. The homer was Heisey’s third of the season and first since April 23 against the Cubs in Cincinnati.

“It seemed like Heisey had no interest in the fastball,” Kontos said. “It was a slider low and away. Unfortunately, it didn’t bounce. He hit it off his front foot, and it carried. It is definitely frustrating.”

NOTES: Heisey made his first start in the field since coming off the disabled list on June 25. Heisey started at designated hitter in one game each at Texas and Oakland on Cincinnati’s last road trip. … The sellout crowd that showed up for Frazier’s bobblehead night and postgame fireworks was Cincinnati’s ninth of the season. The team had a club-record 15 last season. … Tightness in Marco Scutaro’s back prompted Giants’ manager Bruce Bochy to give the second baseman Wednesday night off. … RHP Matt Cain is scheduled to start for San Francisco against RHP Mike Leake in Thursday’s finale of the four-game series.

CINCINNATI (AP) — The Ryan Express has an honored passenger, a hard-throwin’ fellow Texan who wears the same number and... read more