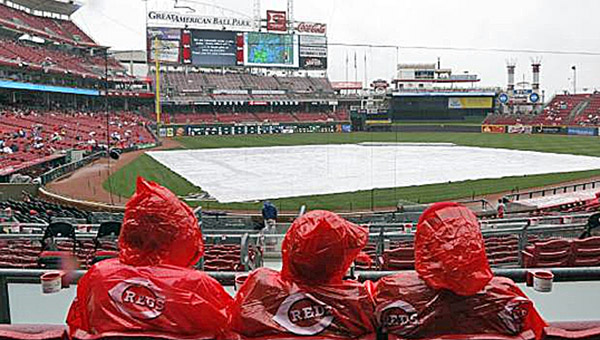 The game between the San Francisco Giants and Cincinnati Reds at Great American Ball Park in Cincinnati was rained out on Thursday. A makeup date has not been set and could be played at a neutral site. (Photo Courtesy of The Cincinnati Reds)

CINCINNATI (AP) — A rainout at Great American Ball Park did more than push Homer Bailey’s next attempt at pitching another no-hitter out of Cincinnati.

It also raised the possibility, San Francisco manager Bruce Bochy mentioned, of the Giants and Reds playing a makeup game at a neutral site.

Thursday’s game never got started and was called after a wait of nearly 2 1-2 hours.

No makeup date was announced. This was the last day the Giants were scheduled to be in Cincinnati this season. The Reds visit San Francisco later this month.

Reds manager Dusty Baker said he would keep his rotation intact. That would mean Bailey, who beat the Giants by pitching his second career no-hitter Tuesday night, wouldn’t start Sunday at home against Seattle.

Instead, Bailey would try to match Johnny Vander Meer’s 1938 achievement of pitching no-hitters in back-to-back starts on Monday in Milwaukee.

Trying to find a makeup date for two teams that might be in playoff contention could be tricky.

The Reds and Giants are both off Aug. 29. It would be the first day after the Reds finish a stretch of 20 games in 20 days and the last before they play 13 games in 13 days; it is also San Francisco’s only day off between stretches of playing on 16 and 17 consecutive dates. Major League Baseball rules prohibit teams from playing more than 20 straight days without permission from the players’ union.

Could Coors Field in Denver be a convenient place to meet?

“There are options they discussed for a makeup,” Bochy said. “August 29 in Colorado. September 30, the day after the season, we would come here (Cincinnati). They discussed a split doubleheader at our place.”

“There are none. There’s only one date when we’re both off, but that would make it 34 (straight) days for both,” he said.

This postponement was only the seventh rainout in the 11-year history of Great American Ball Park and the first since May 1, 2012, against the Cubs.

Even before the rain, Cincinnati’s Chris Heisey figured it was a long shot that he would play Thursday despite homering and driving in two runs the previous day.

It became a sure thing for Heisey and everyone else when the finale of the four-game series was postponed by rain.

Heisey made his first start after spending nearly two months on the disabled list with a strained right hamstring, playing in Wednesday night’s 3-2, 11-inning win. Even if the rain had stopped in time for Thursday’s game to be played, he figured Baker’s caution would keep him on the bench.

“(Baker) usually has a good idea of when you can play and when you can’t, but I told him that I’m feeling great, and I’m ready to play whenever he needs me,” he said.

Sure enough, Heisey wasn’t in Baker’s starting lineup, in part because right-hander Matt Cain was San Francisco’s scheduled starter. That wasn’t the only reason.

“I kept my eye on him. Usually, when you get hurt is when you get fatigued,” Baker said before the game was called.

Giants manager Bruce Bochy said Cain will start the opener of a three-game series against the Dodgers on Friday in San Francisco.

Gaudin has been on the disabled list since June 24, retroactive to June 21, with a bruised right elbow.