Slip repair to shut down section of 141 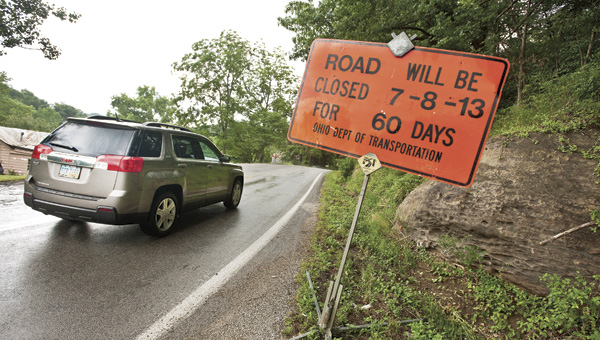 Starting July 8 the direct access to Arabia and Waterloo will be closed to traffic for 60 days while crews repair a road slide slip.

WILGUS — For the next two months, those traveling to Wilgus on State Route 141 will have to find alternate routes while a landslide repair is ongoing.

The construction site will be near the 16.46-mile marker and because of the limited amount of roadway space at that section, it will be closed to all traffic.

“There is not enough room for where the work center is to be established, crews to do the work and where to put the traffic signal,” said Kathleen Fuller, public information officer for District 9, Ohio Department of Transportation. “There is no way we could maintain traffic, get it to move there in a safe and efficient manner.”

One of the main drawbacks to maintaining one lane open with a signal directing traffic is a rock wall along State Route 141 in the area of the slip.

The slip happened about two years ago and it will be repaired with the construction of a 124-foot plug pile retaining wall by BBR Drilling.

Completion date for the project is expected to be the end of September.

Until then the detour for local truck traffic is Buck Creek Road.

“The detour for the purpose of heavy truck traffic, we have to assign them over state routes,” Fuller said. “People will see signs on 775 to go into Gallia County. It will connect back to 141.”

The June grand opening festivities of the Ironton Farmers Market brought out some new customers to try local produce and... read more