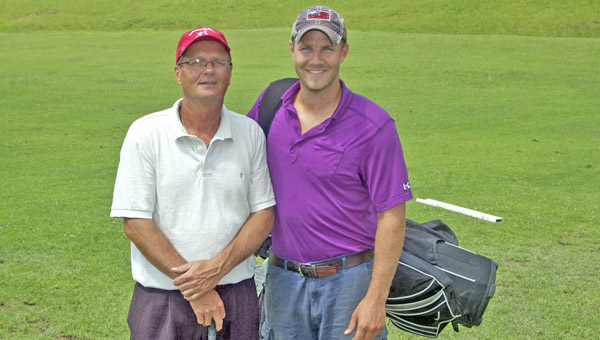 The winning numbers were 1-4-5-12-67 and the powerball 83. It sounds like a ticket for a Mega Millions drawing.

But those numbers had nothing to do with a lottery, although each meant something: a one-stroke win, a 4-under par performance, five birdies, 12 pars and a final score of 67. It all added up to a first place finish among 83 golfers entered in the U.S. Senior Open qualifier at the Worthington Country Club on June 17.

Although it wasn’t a lottery drawing, it felt like it to Ironton golfer John Gagai who posted all those numbers and won the tournament to earn a berth in this week’s U.S. Senior Open.

“I feel like I hit the lottery except I don’t get any money. I have to pay money,” said Gagai.

Gagai, 55, is an amateur and is not eligible to win any of the $2.6 million purse. He finished one stroke ahead of Lee Houtteman of Glen Arbor, Mich. But that doesn’t mean he isn’t going to enjoy the experience.

“People ask me if I’m excited. It’s like a golf gala, sort of like any kind of event. There’s going to be a lot of good golfers, some better than others. It’s a great golf course. I’m just going there and try and enjoy the experience,” said Gagai.

The U.S. Senior Open is one of the top golfing experiences for Gagai who began playing in the fifth grade when his older brother Andy started taking him and some friends to the golf course.

“I’ve spent so much time playing golf, it’s a little reward for all the years I’ve played,” said the Ironton native.

Gagai was an All-Southern Conference golfer for Marshall University, qualified for the U.S. Amateur in 1981 and he has won 12 Ironton Country Club championships.

“I’ve had a lot of great experiences and won a lot of tournaments. The two main things are the U.S. Amateur and winning the club championship,” said Gagai. “I take a lot of pride in winning the country club titles because there are a lot of really good golfers that have come through Ironton like Rick Hannon, Dallas McCoy and Jim McKenzie.”

“These are guys I grew up with. I played with Sindelar and Cook in college,” said Gagai.

The field will consist of 156 professionals and amateurs who are over the age of 50. It will be televised by ESPN2 on Thursday and Friday and by NBC on Saturday and Sunday.

“I plan to play 18 holes the first day and nine the second and nine the third. I want to see what the course does to me. I have a caddy, but that’s a lot of walking. I don’t want to wear myself out,” said Gagai.

The caddy will be another Gagai, son Dennis who is an outstanding golfer himself. Three years ago he beat his father by one stroke to win the club championship.

Players will be cut to low 60 and ties plus anyone within 10 strokes of the leader at the completion of the second round.

While Gagai plans to enjoy his week, he almost didn’t play in the qualifier. A friend, Don Pollard of Portsmouth, kept urging Gagai to register for the qualifier.

“Donny has qualified for the Senior Open twice and he pushed me. I’m glad I did,” said Gagai.

The registration deadline was 5 p.m. on a Friday and Gagai filled out the paperwork and paid the $150 entry fee around noon.

“I didn’t know they only took two at the qualifier. I thought, ‘I can’t walk 72 holes.’ I’m used to going out to the Ironton course and getting in a cart,” said Gagai.

“(Pollard) talked me into it. I signed up at the last minute. It was satisfying to get to play with him on a nice course (Worthington Country Club). I got my wife Sheila to go up with me. She could ride my clubs around since I had to walk. I just went up to enjoy the conditions. I made a bunch of birdies and won.”

“I told myself I was going to be aggressive and set a goal to make six birdies,” said Gagai.

If Gagai has any goals for the Senior Open, he’s keeping them to himself. After all, no one likes to divulge what lottery numbers they’re going to play.

CINCINNATI (AP) — Three players made the All-Star team. A seldom-used player drove in three runs. All in all, a... read more