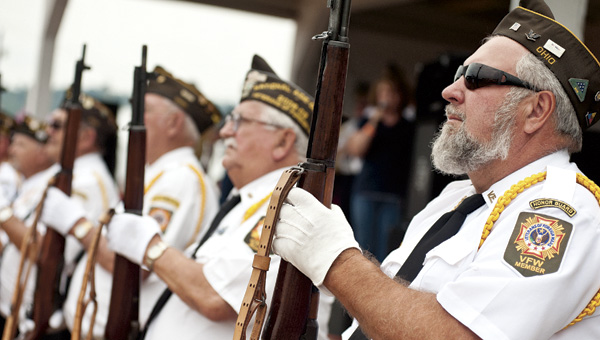 VFW Post 6878 Honor Guard stands at attention during opening ceremonies Monday at the Lawrence County Fair. Events at the fair this week include figure 8 races, rodeo, live entertainment and a demolition derby.

ROME TOWNSHIP –— The 2013 edition of the Lawrence County Junior 4-H Fair got off to an enthusiastic, albeit muddy, start.

Downpours over the weekend sent fair board members scrambling to clean up the grandstand arena.

“The rain kept coming and we kept moving mud. We had several tons,” Jim Thompson, fair board president, said. “On Friday we were here until 2 in the morning. Saturday until 1 and last night at midnight. We had all that mud stack against the fence.”

Thompson thanked those who helped clear it out during the opening ceremonies that focused on scholarships and the contributions of the numerous volunteers who enable the fair to happen each year.

Reading from a letter from Portman, Todd Shelton, district representative for the senator, said “I wish I could be with you today. There is a rich tradition of agriculture in our great state …. (farmers) work early in the morning and until the sun goes down.”

Nick Gatz, regional liaison for Kasich, told the grandstand crowd how much the governor wishes to celebrate the county’s heritage of farming.

After the ceremony Thompson also praised the volunteer work of Rob Calloway of Rolo Excavating for helping create the track and jumps for the motocross event.

ROME TOWNSHIP —Snickerdoodles, cheesecake, buckeyes and brownies were up for grabs at this year’s Lawrence County Junior Fair Board Sweet... read more