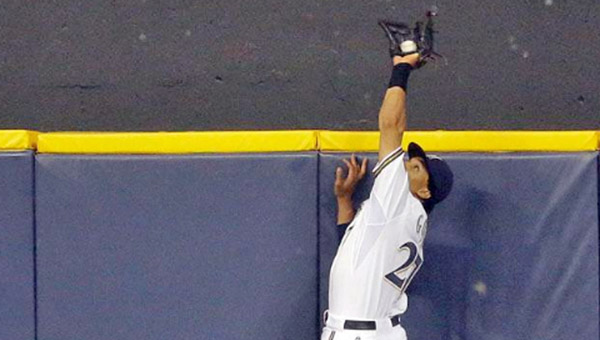 Milwaukee Brewers’ centerfielder Carlos Gomez makes a leaping catch to rob Joey Votto of a two-run homer in the ninth inning and preserve a 4-3 win on Monday. (Photo Courtesy of The Cincinnati Reds)

MILWAUKEE (AP) — Joey Votto took a few steps toward center field, clamoring to see the ball. When Carlos Gomez flipped his glove open as he ran toward the infield, the game was over.

Votto was robbed of a potential go-ahead homer when Gomez made a spectacular catch for the final out, sending the Cincinnati Reds to a 4-3 loss to the Milwaukee Brewers on Monday night.

“The whole thing is really a random occurrence and it’s what makes baseball so special,” Votto said. “Carlos has had a fantastic year this year. Today he didn’t have a good game offensively and he goes out and makes a game-changing play on the defensive end.

“You know, I did everything I could, and he made a great play.”

Reds right-hander Homer Bailey allowed a season-high 10 hits and four runs in his first start since his second career no-hitter. Chris Heisey hit a solo homer for Cincinnati, and Jay Bruce and pinch hitter Xavier Paul each had an RBI single.

But Gomez made the biggest play of the game when he used a perfectly timed jump to grab Votto’s drive, sending a charge through the crowd on an otherwise sleepy night at Miller Park. The dramatic conclusion came after pinch hitter Derrick Robinson walked with two outs.

Votto made an appeal to see the ball in Gomez’s glove while he celebrated in the outfield, and sure enough, it was there.

“When you save the game like that or when you hit a walk-off home run, it’s amazing,” Gomez said. “I never hit one, but I steal home run to win the game. It’s something special, like you can’t wait to get home to see it over and over.”

Jonathan Lucroy homered for the third consecutive game for last-place Brewers, who had dropped three of four. Jean Segura went 3 for 3, and Kyle Lohse (5-6) pitched into the seventh inning for his fourth consecutive winning decision.

Bailey was coming off an absolute gem at home against San Francisco last Tuesday night, when he struck out nine and allowed just one baserunner on a seventh-inning walk. The impressive performance in the Reds’ 3-0 victory gave Bailey a chance to become the second pitcher in major league history to throw consecutive no-hitters.

That opening was slammed shut in the first inning.

Segura dumped a 1-2 pitch into right field for a base hit with one out. He then stole second and went to third on a throwing error by catcher Devin Mesoraco before Lucroy hit his 11th homer to give the Brewers a 2-1 lead.

“It was just one of those days,” Bailey said. “Just never could find a rhythm.”

Segura added an RBI double in the second and an infield hit in the fifth. The All-Star shortstop reached base four times and leads the NL with 113 hits.

Bailey (5-7) was replaced by Logan Ondrusek after he hit Segura with a pitch with two out in the sixth. He allowed a season-high 10 hits and walked three.

“He got out of some tough jams,” Reds manager Dusty Baker said.

Lohse was pulled after he allowed singles to three of the first four batters in the seventh. Heisey was erased when Mesoraco grounded into a double play, but pinch hitter Cesar Izturis and Shin-Soo Choo singled to put runners on the corners.

John Axford came in and surrendered Paul’s run-scoring hit to make it 4-3, but he bounced back to strike out Votto, limiting the damage.

Lohse was charged with three runs and nine hits. The righty improved to 4-0 with a 2.37 ERA in his last eight starts.

Jim Henderson worked the eighth and Francisco Rodriguez finished for his ninth save in nine chances and No. 303 for his career, tying Doug Jones for 22nd on the major league list.

Rodriguez had his left arm over his head and his right hand on the brim of his cap as he walked around in disbelief after Gomez’s game-ending grab.

“He’s so athletic and explosive,” Lohse said of Gomez. “You just see him get good reads. It’s pretty fun to watch.”

Milwaukee got Ryan Braun back from the disabled list, but he did not play in the Brewers’ second win in seven games against Cincinnati this season. Braun, who had been out with a bruised right thumb, took batting practice for the second straight day and could return to the lineup on Tuesday.

While the 2011 NL MVP returned to the active roster, third baseman Aramis Ramirez went back on the DL again with a nagging left knee injury.

Mesoraco got the start behind the plate for Cincy after Baker said Ryan Hanigan was dealing with soreness, declining to elaborate. But Mesoraco has a back issue and appeared to be playing hurt, grounding out with runners on first and second to end the eighth.

“He’s a tough guy,” Baker said. “I don’t know what we’re going to do tomorrow. I don’t know if he’s going to be all right or not.”

NOTES: Johnny Vander Meer remains the only pitcher to throw consecutive no-hitters, accomplishing the feat for the Reds on June 11 and June 15 in 1938. … Brewers RHP Wily Peralta (5-9, 5.27 ERA) is scheduled to face LHP Tony Cingrani (3-0, 3.40 ERA) in the middle game of the series on Tuesday. Peralta was forced to leave his last outing in the sixth inning last Tuesday night at Washington due to a strained left hamstring. “If he feels something, then, obviously, we’ll address that,” Roenicke said. … Paul had been sidelined with a sore right shoulder. Baker said before the game that he could return to the lineup on Wednesday.

CANTON (AP) — Seven past winners, including defending champion Nathan Kerns, begin to play Tuesday in the opening round of... read more