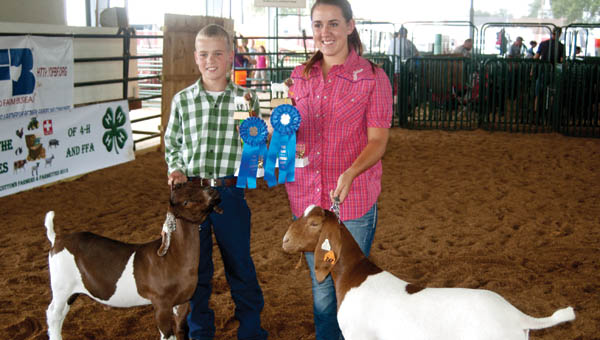 Dylan Back and C.J. Spears show off their trophies for taking top junior and senior showmanship honors.

ROME TOWNSHIP — A veteran in the show ring and a first-timer pulled the top honors in Tuesday’s market goat showmanship show.

Taking the senior showmanship trophy was C.J. Spears of Proctorville, who has been showing market goats for the past 10 years as a member of the Getaway Go-Getters 4-H Club.

“My sister used to show goats and it is just a family tradition,” Spears said.

The secret to her success is working with the animals daily and a lot of hours studying the anatomy of the animal.

Tuesday’s show was the first time Dylan Back, 13, of Kitts Hill, was in the ring for the showman contest and was named junior showman for market goats.

“It takes a lot of hard work and effort,” he said. “I just enjoyed doing it this year.”

Judging the five classes of 4-Hers was Tara Boler of Rittman, who has worked with goats for the past 10 years and been in the ring judging for four.

Overall, Boler said she found the contestants impressive in both their skill in handling the animal and their knowledge of it.

“These kids have worked hard,” she said. “I can tell by their answers and nurturing skills. You have shown off the animal at the best of your ability and that is what showmanship is all about.”

She even applauded the couple of contestants who were faced with recalcitrant animals, including the goat that lay down and refused to get back up.

“You handled it with grace and poise and didn’t get angry,” Boler said. “It is a learning experience and you did an awesome job.”

Starlite 4-Hers ‘hog’ the spotlight